Frank Malzone was a valued member of the Boston Red Sox family from the time he signed a minor league contract with the team in 1948, until his death on December 27, 2015.  His almost 70-year association with the team produced notable achievements on the field, a host of long-term relationships, and many acts of thoughtfulness on his part. 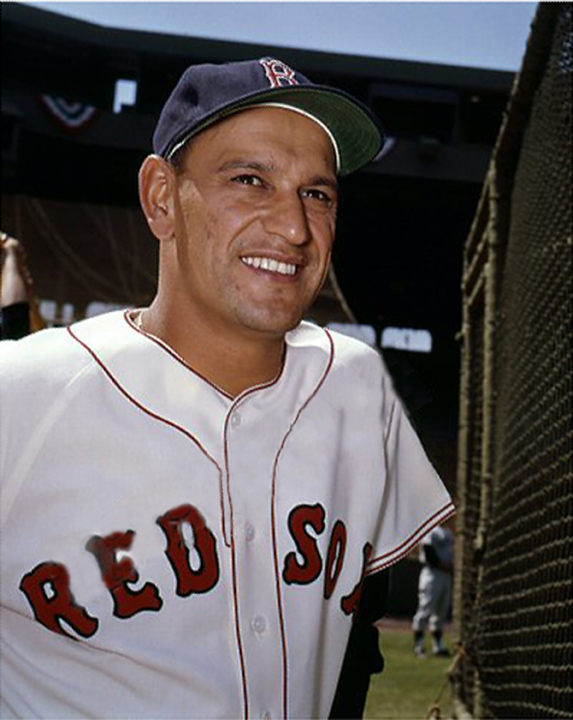 Malzone was a three-time Gold Glove third baseman for the Red Sox, playing with the club from 1955 to 1965, and he was an American League All-Star in six seasons.  He was voted as the top third baseman on the Red Sox All-Time Team in 1969, and he was placed onto the second team based on fan voting in 1982.  “Malzie,” as he was fondly known by teammates and friends, entered the Red Sox Hall of Fame with the first round of inductees in 1995.

Frank Malzone was born on February 28, 1930, in the Bronx, New York.  Asked if he was a Yankee fan growing up, he laughed, and said, “I had to be!  I grew up only a couple of blocks from Yankee Stadium and I played most of my games as a youngster in the ballpark across the street.”

Frank signed a minor league contract with the Red Sox in 1948 for $175 per month.  In 1949, the Red Sox assigned Malzone to their Oneonta, NY, farm club.  It was Frank’s favorite season.  “I played for Eddie Popowski who taught me to be a professional baseball player,” he told me during an interview for Red Sox Magazine several years ago, “and I batted .329, establishing me as a prospect.  Best of all, I met my future wife, Amy Gennerino.  She was the best thing that ever happened to me.”

The Malzone’s were married in 1951, and they were together for 55 years before Amy’s death in 2006.  They settled in Needham, MA, when Frank broke in with the Red Sox and they raised their four boys and a daughter in their adopted community. 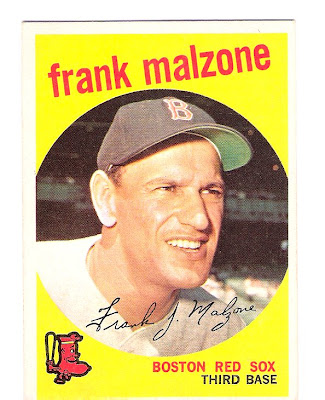 Frank’s debut with the Red Sox was delayed by injuries and two-years of service in the U.S. Army.  He appeared in six games with Boston in 1955, 27 games in 1956, and in 1957, he took over as the every-day third baseman for the Red Sox.

Former Red Sox infielder Ted Lepcio was Malzone’s teammate for five seasons and his friend for 60 years.  “Frank was a great player—the numbers tell you that.  But I will always remember him as a great teammate, a terrific guy, and a wonderful family man.”

Once Frank made it to Boston to stay full-time with the Red Sox he immediately made up for lost time.  New York Yankees’ manager Casey Stengel named him to the 1957 American League All-Star team in his first full season.  That year he also became the first player to lead American League third basemen in games, putouts, assists, double plays and fielding average.

The Rawlings Golden Glove for fielding excellence began in 1957 and initially it went to the best fielder at each position among all major leaguers.  Frank Malzone was the Gold Glove winner in that first year and when seperate awards were given for the American and National Leagues, he won again in 1958 and 1959.  He remains the only Red Sox third baseman to win a Gold Glove.

Pitcher Frank Sullivan, who was a teammate of Malzone from 1955 to 1960, recalled how reassuring it was to look over to third base and see Frank there.  “I knew he could get to anything, could do it all.”  Sullivan, who passed away on January 19, 2016, added, “My catcher, Sammy White, used to say, ‘Just throw 27 ground balls to Frank Malzone and we’ll be fine.’” 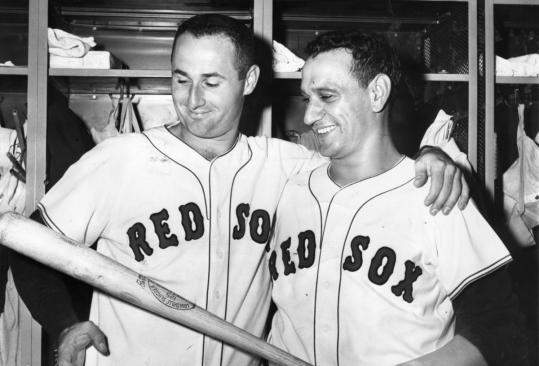 Infielder Dalton Jones, who is best remembered for his heroics with the Impossible Dream Team of 1967, was a teammate of Frank’s when Jones first broke in with the Red Sox.  “I had watched Frank from the stands when I was a youngster.  What I remember best about playing with Frank,” Dalton says, “is what a gentleman he was.”

Interviewing Frank could be difficult because he didn’t like talking about himself.  But when I sat down with him for our Red Sox Magazine feature, I got him talking about his relationship with Red Sox icon Ted Williams.  “One of my great memories is making the All-Star team in 1957, and flying to the game with Ted Williams,” Frank remembered.  “It felt great travelling with one of the all-time greats and him treating me like an equal.”

Malzone was one of the better hitting third basemen during his 12 years in the big leagues, but Ted Williams was sure he could do better.  “Ted was always after me because I would swing at the first good pitch I saw,” Frank chuckled.  “He would say, ‘You would be a much better hitter if you were patient.’  And I would say, ‘Ted, I can’t hit like you.  I have to swing at the first pitch I know I can handle!’”

When future Hall of Fame third baseman Brooks Robinson joined the Orioles in 1960, he broke Malzone’s stranglehold on the Gold Glove, winning it himself 16 years in a row.  But the late Frank Sullivan thought Malzie was Robinson’s equal.  “Malzone’s problem was he made every play, even the toughest ones, look easy.”  Referring to his first Gold Glove, Malzone used to tell Brooks Robinson, “Brooksie, I’ve got something you will never win.  A Gold Glove for both leagues!”

By 1965, the Red Sox had decided to go with younger players and they obliged Malzone by giving him his release in the off-season.  Frank signed with the California Angels and he played 82 games for them in 1966.  Asked if it felt strange wearing an Angeles’ uniform after all his years with Boston, he said, “Yes, especially when we came to Boston and I changed in the visitors’ locker room!”

In 1967, he re-joined the Red Sox as an advance scout just in time for the Impossible Dream season.  His scouting reports helped the Red Sox to defeat the Minnesota Twins for the American League pennant and to force the St. Louis Cardinals to seven games in the World Series.  His contributions as a scout and instructor for more than 50 years were invaluable to the Boston Red Sox.

Rico Petrocelli was a two-time All-Star at shortstop for the Red Sox between 1963 and 1970, and he moved to third base in 1971.  Looking back, Rico recalled, “Malzie was my mentor when I moved from shortstop to third base.  He spent hours teaching me every aspect of playing the position.  I have so many good memories of him and I’ll miss seeing his smiling face.” 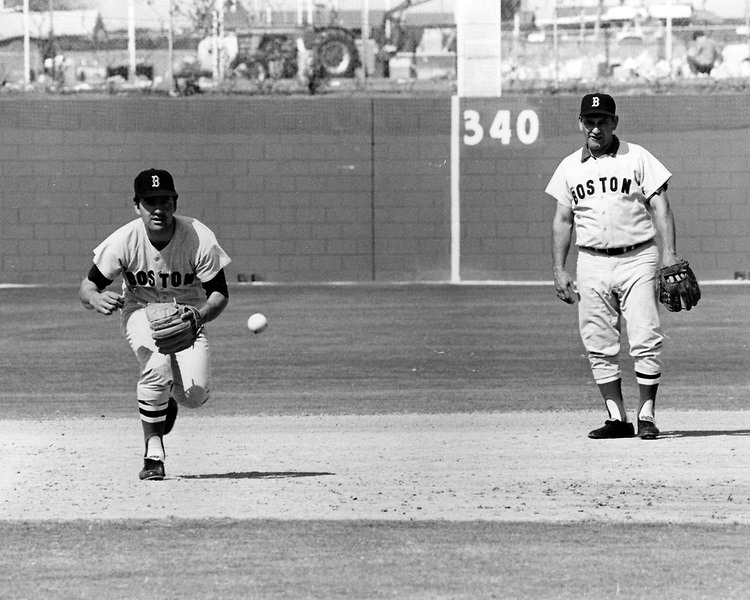 Frank Malzone was a constant presence at spring training, working with minor league prospects and the major leaguers.  Dwight Evans came up to the Red Sox as a 20 year old in 1972, and he worked with Malzie at spring training for 20 years.  “He was always a coach for me,” Dwight remembered, “instructing me on the finer points.  In some ways, Frank was like a big brother to me.”

When Frank’s scouting career was over he became a Player Development Consultant and he continued to dispense words of wisdom to veterans and prospects alike.  Luis Tiant and Frank spent many days at spring training riding from practice field to practice field in their golf cart.  Speaking of his friend of almost 40 years, Luis said, “I will miss him being at spring training and talking baseball with everyone, and I will miss the good times we had.”

Hall of Famer Wade Boggs, who will have his uniform number “26,” retired by the Red Sox in May, said, “Early on in my minor league career, Frank Malzone and Eddie Popowski worked tirelessly with me on becoming a better third baseman.  Not only Johnny Pesky, but Frank Malzone was instrumental in my development as a third baseman.”

Over almost 50 years of coaching and advising players, Frank never lost his ability to relate to players of any age.  Third baseman Kevin Youkilis, with the Red Sox from 2004-12 and 50 years younger than Malzone, said, “Frank was a huge influence on me coming up.  To be able to learn from a Gold Glove third baseman was so beneficial.  He was a great man and he was always so nice to me.”

Looking back on his rookie season and his relationship with Frank, Carl Yastrzemski said, “When I first came to the big leagues in 1961, Frank was the guy who took me under his wing.  I struggled when I first came up, and he took care of me and stayed with me.  He was a real class guy, a very caring guy, and I owe him a lot.  You aren’t going to find too many guys like him.” 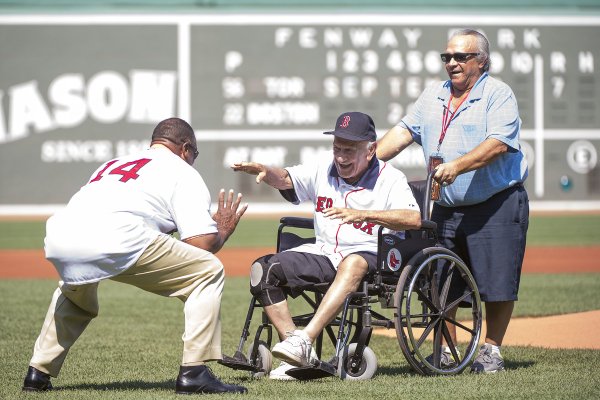 In the end, Frank’s long-time friend Dick Beradino probably said it best: “If I were in a foxhole somewhere in a war, the one person I would want with me in that foxhole is Frank Malzone.  He’d have your back.  That’s the kind of person he was.”