Thank you for visiting bostonbaseballhistory.com. Our website is dedicated to preserving the rich baseball heritage of our region from the Boston Red Stockings in 1871 through the Boston Red Sox of today.  While our focus will always be on our two professional baseball teams, from time-to-time we will include features on college baseball, the Cape Cod League, and other Boston area baseball organizations. 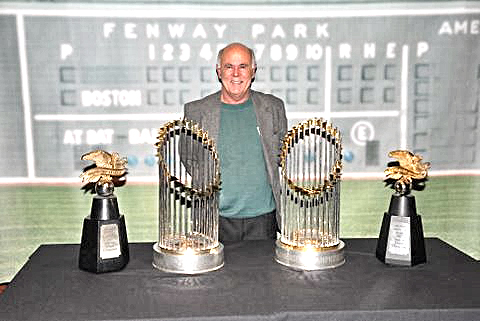 Herb Crehan is a Boston baseball historian who has written over 15o feature articles for the official program of the Boston Red Sox during his 27+ seasons with the club. He is the author of three books, LIGHTNING IN A BOTTLE: The Sox of ’67, Red Sox Heroes of Yesteryear, and The Impossible Dream 1967 Red Sox: Birth of Red Sox Nation. He has also contributed chapters to six other books on Boston baseball history. Crehan speaks extensively on Boston baseball history including appearances at the Baseball Hall of Fame in Cooperstown, NY, NPR’s “All Things Considered,” New England Cable News, WBZ radio, and numerous Society of Baseball Research (SABR) meetings throughout New England. He is a long-time member of SABR and the Boston Braves Historical Association.

He created and presented a five-week course on the “History of Boston Baseball: 1871-2013” in the spring of 2014 for the Sherborn Council on Aging.  The four sessions were recorded and re-broadcast by Dover-Sherborn Cable-TV.  This course has been well-received by numerous MetroWest audiences including Regis University and it is continually updated to reflect new interviews with Red Sox players and additional research.

Books as a Contributing Author:

The contents of bostonbaseballhistory.com represent a long-term commitment to the preservation of Boston’s baseball memories.  We hope you will return in the future to enjoy many features on the Boston Red Sox, our history of Opening Days in Boston over the years, memories of the Boston Braves, and the Hearst Sandlot Classic .

Thank you again for finding us and we welcome your feedback and ideas for future feature articles.  Please click here to share your thoughts.

Frank was the author of Life Is More Than Nine Innings, which was published by Editions Limited (Honolulu, Hawaii) in 2009.  He was also the author numerous essays that he shares with family and friends.

Following his retirement from Major League Baseball he settled on Kauai in the Hawaiian Islands. After attaining PGA certification as a golf professional he served as the Head Pro at one of Kauai’s best-known golf courses.

Frank and his wife Marilyn, who passed away in 2020, lived in Lihue on Kauai, where they enjoyed golf, fishing and good friends.  Their son Mike has two children, Kea and Pono. Kea is very talented craft artist, and Pono has a talent for baseball that could make him a future major leaguer. I am proud that they include me as a member of their extended family.

Dick Trust covered sports for The Patriot Ledger of Quincy, Mass., for 40-plus years before retiring in 2006. Dick is now a freelance writer and photographer, and he lives in Scituate, Mass. His limited-edition, coffee-table book of never-before-published photos, Ted Williams: Newly Exposed, is available by contacting him at rtrust68@comcast.net  Each copy of the book is $49.95 plus shipping.  Dick will sign each book upon request.