Everything You Ever Wanted to Ask Frank Sullivan

Herb Crehan: The 2013 Red Sox are off to a great start; what do you like best about this team?
Frank Sullivan:  They can come from behind and win which means they bear down until the game is over.

Herb Crehan: Where do you think this year’s team needs to improve?
Frank Sullivan:  Not a lot if Shane Victorino can stay healthy.  You can always use another pitcher, but the team seems to be getting along well.  I know I harp on it all the time but that really matters. 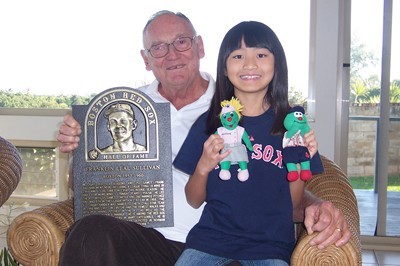 Herb Crehan: You and Tommy Brewer formed a nice 1-2 punch for the Red Sox in the 1950s; how did that combination compare to Lester-Buchholz?
Frank Sullivan: Tom and I were both right-handed so maybe having one from each side makes it harder for the opposing manager to set a different lineup to match up.   Other than that I can’t really say.  We had taller mounds [15 inches vs. today’s 10 inches] no pitch counts and we pitched every fourth day.

Herb Crehan:  What do you think of the job John Farrell is doing and who was your favorite manager?
Frank Sullivan: Farrell has the team playing to win every game.  My favorite manager was Sam Mele [Minnesota Twins: 1962-63].  Sam managed the same as Farrell and he had a velvet hand to boot.

Herb Crehan: Juan Nieves seems to be doing a great job with the pitchers; how important is a good coach to the pitching staff and who was your favorite?
Frank Sullivan:  My favorite pitching coach was Dave “Boo” Ferriss [Boston Red Sox pitching coach: 1955-59].  Boo was always at your side with a good word.  Boo didn’t do a lot of teaching but he provided encouragement to keep doing your thing without worrying about how other people felt about it.

Herb Crehan: Since it was illegal I’m sure you never threw a spitball in a game, but did you ever try it on the sidelines?
Frank Sullivan:  I never did.  But every once in a while Sam White [Red Sox catcher: 1951-59] would spit tobacco juice on a ball and throw it back to me on the mound.  I would see it coming and not catch it.  I needed a good grip to be able to throw strikes. I wish I had known about resin and sunscreen.

Herb Crehan: Hitting coach Greg Colbrunn seems to be doing a good job; did you ever listen in to your hitting coaches to get a sense of how hitters set up for pitchers?
Frank Sullivan:  You bet I did. In fact I would pitch a lot to the opposite of what Rudy York [Red Sox hitting coach: 1959-1962] would preach because he was great hitting coach.

Herb Crehan: Back in you day pitchers batted—they didn’t necessarily hit—but they batted; do you wish they the designated hitter back in the day?
Frank Sullivan:  Not for a minute would I have wanted the designated hitter when I pitched.  Instead of a pitching to a pitcher you now have to pitch to one of the best hitters in the league.  And yes, it would have taken a lot of fun out of the game for me.

Herb Crehan: Most fans are familiar with your one lifetime triple, but did you ever hit a home run in batting practice?
Frank Sullivan:  None of your business!

Herb Crehan We know the bullpen coach keeps order out there and makes sure players aren’t using the phone to order pizzas, but what else would a Dana LeVangie do out there?
Frank Sullivan:  I’m not really sure, but I do remember our bullpen coach George Susce, Sr.   George was a man that said he owed everything to baseball and he was willing to gladly help you in any way you needed.

Herb Crehan: Now I’m going to put you on the spot: where do you see the 2013 Boston Red Sox going in the balance of the season?
Frank Sullivan:  I see no reason we can’t be at the head of the class where we are now.