When the Atlanta Braves took the field against the Houston Astros for Game One of the 2021 World Series, the usual complement of four umpires increased to six with the addition of the umpires who worked the left and right field foul lines at Houston’s Minute Main Park.

When American League umpire Tom Connolly took his position behind the plate at the old Huntington Avenue Baseball Grounds on October 1, 1903, to umpire the first World Series game ever played, his only companion was National League umpire Hank O’Day.  Connolly, who also umpired the inaugural American League game in 1901, was probably very happy to have O’Day stationed at second base.  During the regular season at that time, major league umpires worked the games alone!

Today, it seems quite remarkable that Connolly earned the honor of umpiring in the first World Series opener which the Boston Americans took from the Pittsburg Pirates by the score of  7-3.  Connolly was born in Manchester, England, in 1870, and had never even seen a baseball game before he arrived in Natick, MA at the age of 13.

He told baseball writers of his era, “I never played the game well, but I was determined to learn everything I could about the game.  I read every book I could get my hands on, and became very knowledgeable about the game.”

Apparently Connolly’s crash course worked.  During his thirty year umpiring career, and more than twenty years as the first Chief Umpire of the American League, he was regarded as the premier authority on the rules of baseball. Connolly was consulted by all of the clubs and both league presidents as the final word on disputed rulings.

Connolly began his career in his hometown of Natick umpiring for a YMCA league. He was spotted as a potential major league umpire by Tim Hurst of the National League and assigned to umpire in the old New England League in 1894.  By 1898 he was pronounced ready for the major leagues, beginning his National League umpiring career at the age of 27.

Connolly quit the National League in disgust in 1900 because his rulings were not supported by the league.  When the upstart American League was formed by Ban Johnson in 1901, the legendary Connie Mack of the Philadelphia Athletics  recommended Connolly to Johnson.

Ban Johnson set about to distinguish his fledgling league by backing his umpires to the hilt.  This eliminated the brawling and rowdy behavior that plagued their National League rivals.  Johnson’s approach was a perfect match with Connolly’s passion for decorum.  He once described an umpire as “one with poise and without rabbit ears.” 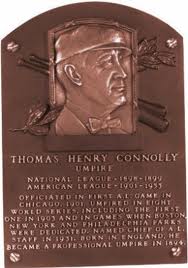 Connolly threw out ten players during the American League’s first season, but at one point during his distinguished career, he put together a stretch of ten years without a single ejection.  Detroit Tigers star and Hall of Famer Ty Cobb once observed, “You can go just so far with Tommy.  Once you see his neck go red it’s time to lay off.”

Tom Connolly had several run-ins with the immortal Babe Ruth.  They may well have been baseball’s original odd-couple.  Connolly stood just five feet seven inches and remained dignified at all times.  Ruth was a giant of a man, uncouth and profane.  Despite their differences, when Ruth was with the Red Sox and living in Sudbury, MA, he would occasionally drop by Connolly’s Natick home to talk baseball.

Ruth loved to try to use his personal relationship with Connolly to his advantage. If Connolly called a strike on a pitch that Ruth thought was high, he would step out of the batters box, hold his hand out shoulder high, and say to Connolly, “Young Tommy must be about this tall by now I would guess.”  The crowd would roar their approval of Ruth’s apparent protest, while Connolly would motion impatiently for the Babe to step back in.

If the Babe thought a strike was outside, he would step out, spread his hands about six inches apart and say, “You should have seen the fish I caught in the Sudbury River the other day.  It was at least this big.”

In August of 1922, Connolly was umpiring behind the plate in a game between the New York Yankees and the old Washington Senators at the Polo Grounds in New York. On this particular day, a large delegation from a local orphanage was seated in the right-field bleachers holding a sign that read, “Hit one up here Babe.”  On his first at bat, the Babe did exactly that, lofting a home run directly into the midst of the group. 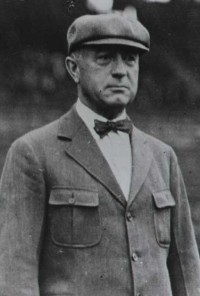 On his next turn at bat, Ruth took exception to several of Connolly’s calls.  The diminutive arbiter summarily ejected Ruth from the game.  Haywood Hale Broun, who would later become a nationally-known radio commentator, was a young sportswriter covering that game for the old New York World.  The next day he wrote of Ruth’s heroic home run, “Ruth will go to heaven for that.” Of Connolly’s third inning ejection of Ruth, Broun added, “We have our doubts about Tommy Connolly.”

Ironically, a recommendation from Connolly who was a pious man and a daily communicant, may have been Ruth’s best shot at admission to the great major league in the sky!

Connolly’s umpiring career continued through 1931, when he was appointed as Chief Umpire for the American League by then league President William Harridge.  Until he retired in 1954 at the age of 83, Connolly continued to advise the league’s umpires, and to scout for potential major league umps.  “Nobody ever bought a ticket to see an umpire.” was his advice to rookie umpires.

In 1953, Tom Connolly and the renowned National League umpire Bill Klem became the first umpires ever elected to Baseball’s Hall of Fame.  Klem was more flamboyant and better known than Connolly, but no umpire was ever more respected than the Natick Massachusetts  resident.

After Tom Connolly threw Babe Ruth out of the “orphan’s game” with the Senators in 1922, the Babe played his remaining thirteen years in the majors without a single ejection.

Babe Ruth could never remember anyone’s name.  He greeted Presidents and newsboys alike with, “Hey kid.”  Not so with Connolly.  Whenever the two met, Ruth would immediately say, “Hey Tommy, remember that time you tossed me out of that game at the Polo Grounds?!”

It wasn’t until 1952 that the major leagues instituted the four man umpiring crew as the standard for regular season games.  Up to his dying day Tom Connolly insisted, “three is the right number of umpires to work a game effectively.  There simply isn’t enough for the fourth umpire to do.”

Tom Connolly felt that he had umpired a good game if nobody remembered his role once the game was over.  But his contribution to the American League and the integrity of major league baseball is worth remembering.  After all, even Babe Ruth knew his name! 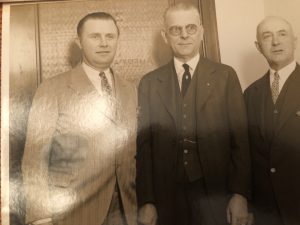