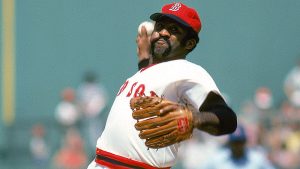 Luis Tiant #23 of the Boston Red Sox pitches during a game circa the 1971-78 season. (Photo by Rich Pilling/ Getty Images)

He whirled, and he twirled.  At the midpoint of his pitching motion, Luis Tiant would turn his back completely to the hitter, and he appeared to be counting the crowd in the centerfield bleachers.  When he corkscrewed around for his delivery, the hitter knew he could be facing any one of six different pitches thrown from three different arm slots.  The result of this baseball ballet, more often then not, was a series of outs culminating in yet another Red Sox victory.

“The 1975 season was my favorite for all my time in baseball,” Luis Tiant declares during a spring training interview this year at JetBlue Park at Fenway South.  “That was the best team I ever played on.  We should have won the World Series.

“Most important I got see my parents for the first time in years.  My mother visited us in Mexico City in 1968, but I hadn’t seen my father since 1961.  It meant the world to me to see them,” Luis says with strong emotion.

Luis Tiant began his professional baseball career as a 19-year-old with the Mexico City Tigers just after Fidel Castro took power in Cuba in 1959.  Following three seasons with the Tigers, Luis planned to return to Cuba with his new bride, Maria, in 1961.

“When I called my father to tell him I was coming home he said, ‘Don’t do it.  I don’t think you will be able to get out.’  I wanted to go home so badly but I took his advice,” Luis remembers.

When Senator George McGovern held talks with Castro in 1975, he included a plea for the Cuban government to allow Luis’ parents to come to Boston for a visit.  With the additional help of U.S. Senator Edward Brooke, Luis’ parents arrived at Logan Airport on August 21, 1975.

Luis Clemente Tiant was born November 23, 1940, in Marianao, Cuba.  His father, Luis Tiant, Sr., was a legendary pitcher for the New York Cubans of the Negro Leagues and in Cuban winter ball.  “I remember watching my father pitch and trying to copy his motion,” he recalls.

Luis Sr. tried to discourage his son from pursuing a baseball career.  “The players in the Negro League had a tough life and he didn’t want me to go through that,” Luis says.  “But when I was 16 he gave me his blessing.”

After three strong seasons with Mexico City, the Cleveland Indians signed him to a contract and Luis was called to the majors in July 1964.  He went 10-4 for the Indians in 1964, and he won 35 games for the Tribe over the next three seasons. 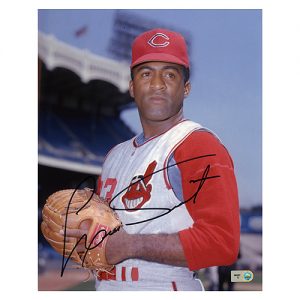 The 1968 season was Luis Tiant’s career-best.  He won 21 games for Cleveland and he was selected as the starting pitcher for the American League in the All-Star game.  His ERA of 1.60 led the American League and set a standard that hasn’t been matched in the AL since.

In 1969 Cleveland traded Tiant to the Minnesota Twins.  He got off to a fast start with the Twins in 1970, but he had developed arm trouble and the Twins released him in 1971.

After being released by the Atlanta Braves in May 1971, the Red Sox signed Luis to a minor league contract and called him up one month later, using him in 21 games.  In 1972, Luis rewarded the Red Sox by winning 15 games while compiling a league-leading 1.91 ERA.

He followed that with 20 wins in 1973 and 22 wins in 1974.  His outstanding 1974 season earned him a third American league All-Star selection. And his style and flair made him a lifelong Fenway favorite.

How did Luis feel about the Red Sox chances in 1975 when the regular season started?  “I knew we had a good team,” he answers, “but I never looked ahead too much in spring training.  It’s a long season.  You have injuries, maybe you add some players.”

Luis Tiant went 2-3 in April and at the end of the month the Red Sox were in fifth place in the AL East with a record of 7-9.  “I had a bad back for most of that season and I had some trouble early,” he says.  “We knew we were a good club.  The veterans stepped up and we got back on track.”

Over the next two months the Red Sox won 34 out of 56 games and on July 1st they led the AL East with a one game lead over the Yankees.  During this time Luis Tiant put together a record of 9-4.  “I always pitched better when the weather warmed up,” Luis emphasizes.

The 1975 Red Sox had their best month in July, winning two-thirds of their 33 games and a double-header sweep of the Yankees late in the month virtually eliminated the Bronx Bombers.  When the calendar flipped to August, the first-place Red Sox held an 8.5 game advantage over the second place Orioles.

On August 26, Luis Tiant Sr. threw out the first pitch before a game against the California Angels while his proud son stood behind him on the mound holding his father’s suit coat.  Dissatisfied with his first pitch, Luis Sr. threw a strike right down the middle with his second pitch, delighting the sellout Fenway crowd. 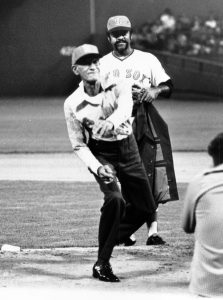 In the only dark spot of the evening Luis Jr. gave up five runs to the Angels and the Red Sox lost 8-2.  “I think I tried to do too much that evening,” Luis says.

Luis pitched poorly against the Oakland A’s in his next start, and the Red Sox shut him down for 11 days to see if a break would help.  “That rest made a difference the rest of the way,” Luis says.

Some time off was exactly what Luis needed because he pitched masterfully in his next game, holding the Detroit Tigers to three hits and one run in a complete game 3-1 victory.  Five days later he out-dueled the Baltimore Orioles’ Jim Palmer in a Fenway Park pitching match-up for the ages.

Luis Tiant shut-out the Cleveland Indians 4-0 at Fenway Park on September 26, for his 18th win, assuring the Red Sox of at least a tie for the AL East Division.  The team clinched the division the following day and prepared to meet the defending World Champion Oakland A’s in the 1975 ALCS.

“When the series started all we heard was, ‘Oakland, Oakland, Oakland,’” Luis chuckles.  “We knew they were good but we felt we were better.  You have to win on the field and we did.”

In Game One of the 1975 ALCS Luis Tiant held the A’s to three hits and one run as the Red Sox won 7-1 before a crowd of 35,578 at Fenway Park.  It was Luis’ fourth straight complete game win at home.

Carl Yastrzemski’s hitting and fielding led the team to a 6-3 win at home the following day, and a 5-3 win in Oakland gave the Red Sox a three-game sweep over the favored A’s.  The Red Sox headed home to open the 1975 World Series against the widely-acclaimed Cincinnati Reds.

“We knew all about the Reds and the ‘Big Red Machine,’” Luis says.  “They were good.  But we were good too.  And we had just swept the A’s.  We weren’t worried about any Big Red Machine.”

Game One of the World Series was played on a Saturday afternoon at Fenway Park, which was crammed with dignitaries and celebrities.  Luis Tiant was the Red Sox starting pitcher.

“Game One might have been my best game as a big leaguer,” Luis insists.  “My parents were there with all my family and I must have had about 15 friends from Mexico.  It was on national TV so it was a big deal.”

Luis whirled and twirled and seemingly hypnotized the Reds.  He held the Big Red Machine to five hits over nine shutout innings, leading the Red Sox to a 6-0 win in the Series Opener. 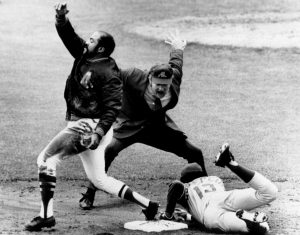 “I had a plan that day and I stuck with it,” Luis remembers.  “They never really touched me.  Even when they hit the ball they hit it right at somebody.”

When Luis Tiant took the mound for Game Four at Riverfront Stadium in Cincinnati, the Red Sox trailed the Reds by two-games-to-one in the Series.  That evening his back was bothering him and it took him awhile to settle in, but when the Red Sox gave him a 5-4 lead in the middle innings, he reached a little deeper.

“My stuff wasn’t as good as Game One so I needed a different plan,” Luis says.  Luis’ different plan held the Reds scoreless over the final four innings and he walked off the mound a 5-4 complete game winner having thrown an amazing 163 pitches.

Asked if an additional day of rest would have been helpful to him, Luis shrugs and answers, “Maybe yes, maybe no.  I shut them out for four innings,” Luis says referring to his Game Six start.  “I only made one bad pitch.  The pitch I made to George Foster in the seventh inning that he hit off the centerfield wall was a bad pitch.”

Luis Tiant left to a standing ovation in the eighth inning with the Red Sox trailing 6-3.  At that point he had been the winning pitcher in three of the Red Sox five postseason victories.

Tiant’s seven innings became a footnote after Bernie Carbo tied the game in the eighth inning with a three-run homer and Carlton Fisk’s twelfth-inning home run set off a long-remembered celebration.  “Maybe I helped make it more exciting,” Luis chuckles.

The following evening the Reds defeated the Red Sox 4-3 to earn the 1975 World Championship.  “I still think we should have won.” Luis says.  “No disrespect to the Reds, but I think we would have won if we had Jim Rice,” he says referring to the loss of the outstanding rookie who was hit by a pitch in late September.

Luis Tiant was inducted into the Red Sox Hall of Fame in 1997.  As shown in the table below, he ranks among the top-twenty in nine important Red Sox career pitching categories.

Tiant and his wife Maria, live in Wells, ME.  “We love it there,” Luis says.  “The people are really nice and it is not that far to Boston.”  The Tiant’s have three grown children and they have a grandson and a granddaughter that they dote on.

Luis has been a spring training instructor the Red Sox for many years.  Tiant, who will be 75 in November, clearly enjoys his status as a Red Sox elder-statesman.  During our interview he paused to greet everyone from equipment manager Pookie Jackson, to players’ wives and children, to Principal Red Sox Owner John Henry.

“I’ve talked to both of them,” Luis says.  “I told them: ‘If you play hard and play well, these fans will love you.  If you don’t play hard and well, they will boo you.’  They understand.  They’re both good kids and they work hard.”

Luis loves to talk with Red Sox fans at El Tiante on Yawkey Way during Red Sox home games.  “They come up to me and talk about games I pitched years ago.  It makes me feel good that they remember me from long ago. 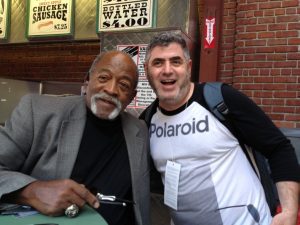