Looking back 48 years, Orlando remembers, “When the Red Sox called asking me about being their designated hitter, I didn’t know what they were talking about.  I said, ‘What’s a designated hitter?’  There had never been such a thing in baseball.  With my knees, I couldn’t run but I knew I could still hit.  It was a great thing for me.”

“I had played with and against Orlando in Puerto Rican Winter League for 12 years,” Jose Santiago recalled. “We were such friends we had him to our house for dinner before Game One. I told him ‘Orlando you are not going to get a hit off me tomorrow! He laughed and told me he would, but he went 0 for 4 because I knew how to pitch to him,'” Orlando laughed. 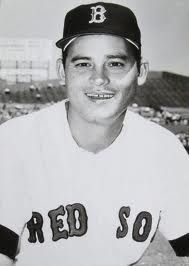 The advent of the designated hitter rule in the American League in 1973, gave Orlando Cepeda a new lease on life.  The Red Sox took a chance that a right-handed power hitter would be the ideal DH for a team playing half its games in Fenway Park 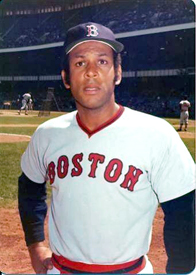 In 2008, the Giants erected a nine-foot statue in his honor outside of AT&T Park.  His statue stands alongside the statues of Giants’ greats Willie Mays, Juan Marichal and Willie McCovey.  San Francisco had fully embraced their first home-grown baseball star.