Catching up with Ted Lepcio 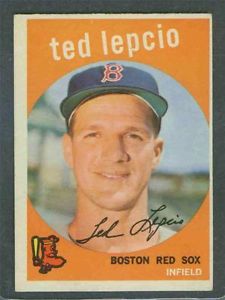 Ted Lepcio graduated from Seton Hall University in June of 1951, and ten months later, after playing in only 89 minor league games, he was the starting second baseman for the Boston Red Sox on Opening Day in Washington, DC.  And that game against the Washington Senators on April 15, 1952, would turn out to be one of the highlights of Ted’s ten-year MLB career.

More than 60 years have passed since that memorable Opening Day, but Ted Lepcio still has a strong recall of the events leading up to that day and the day itself.  During a recent interview, Lepcio remembered, “The Red Sox had decided to go with younger players and they hired Lou Boudreau as manager to introduce the ‘youth movement.’”

In February 1952, the Red Sox preceded regular spring training in Sarasota, FL, with a special training session for young prospects in their minor league system.  “I was invited,” Ted remembers, “and Jimmy Piersall was there along with Sammy White, Dick Gernert, Norm Zauchin, Faye Throneberry, and a group of other younger players.”

Lepcio was being groomed to play second base with the Red Sox after spending his amateur career as a shortstop.  “After I graduated from Seton Hall, I reported to the Louisville Colonels in Triple-A.  Eddie Popowski [legendary Red Sox coach] hit hundreds of groundballs to me at second and as the season went on I got more comfortable there.”

Lepcio, Jimmy Piersall, Sammy White and a number of other younger players were held over for the official spring training camp in March.  One of the first Red Sox regulars that Ted Lepcio met was future Hall of Fame member Ted Williams.

Ted Lepcio still remembers his introduction to the Red Sox icon.  “He hollered at me in his big booming voice, ‘Who are you, rook?’  I introduced myself, we shook hands, and that was the beginning of a wonderful friendship.

“For whatever reason, Ted took a liking to me,” Lepcio says.  “He chose me as his warm-up partner, and we talked all the time.  He used to get mad at me for not being a better hitter.  He would tell me to be more patient and more selective all the time.

When legendary second baseman Bobby Doerr retired before spring training camp in 1952, his position was up for grabs.  Lepcio played well in the field and produced at the plate in spring training games and Lou Boudreau named him to open the season at second base. 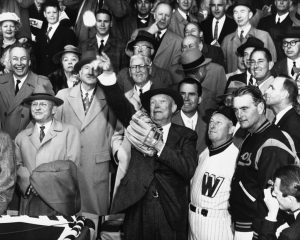 Teaming with Lepcio as his double play partner was Jimmy Piersall.  Piersall had spent his entire minor league career as an outfielder but former shortstop Boudreau was convinced that Jimmy had the tools to convert to short.

“Jimmy and I were surrounded by veterans like Johnny Pesky, Walt Dropo and Dom DiMaggio, but when it came time to turn a double play or to handle balls hit up the middle, we were on our own,” Lepcio recalls.  “We had a lot to deal with.”

Lepcio’s memorable day at Griffith Stadium in Washington, DC, began when President Harry S. Truman threw out the ceremonial first pitch.  Players from both the Red Sox and the Senators gathered in front of the special Presidential box and after a brief scramble, Lepcio ended up with the ball.

“I was escorted over to meet the President and he said, ‘How are you son?’  I said, ‘Fine, Mr. President.  How are you?’”  The ball, which was reported to be the oldest baseball in existence, was then shipped off to the Baseball Hall of Fame in Cooperstown, NY.

In the seventh inning, facing Washington’s pitching ace Bob Porterfield, Lepcio singled sharply up the middle for his first major league base hit.  And for good measure Ted stole second base even though the Senators had called for a pitch-out.

Ted Lepcio began his major league career by warming up with future Hall of Famer Ted Williams, exchanging pleasantries with the President of the United States, getting his first base hit and stealing his first base.  How does that rank among his baseball memories?  “I would have to say that was my most memorable day in baseball,” Ted smiles.

In addition to teaming with Piersall on the field, Ted was Jimmy’s roommate off the field.  Ted is very circumspect in describing Piersall’s behavior during the 1952 season.  “Jimmy was very troubled.  I did my best to help him but he needed medical help.” 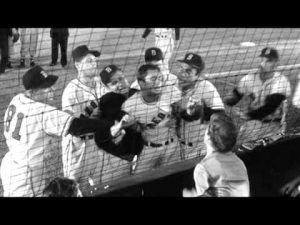 Ted Lepcio was Piersall’s roommate again in 1953 when Jimmy returned from treatment for a nervous breakdown.  “I didn’t really see any difference when he came back the next season,” Ted offers candidly.  “When that season [1953] came to an end, I told him I thought we both needed a change and he agreed.”

During Lou Boudreau’s three seasons of managing the Red Sox youth movement, he was constantly tinkering with the lineup.   Ted Lepcio played mostly at second base but Boudreau used him at shortstop and third base as well. 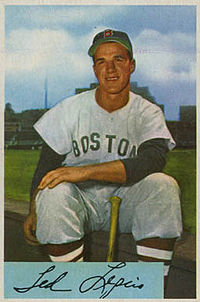 Red Sox pitcher Frank Sullivan was Lepcio’s teammate from 1953 to 1959.  Frank says, “Ted was a steady infielder with a strong arm and good pop at bat.”  Sullivan adds, “When I was pitching, if I had Milt Bolling at short and Ted Lepcio at second base behind me, I was a very happy pitcher.”

Ted Lepcio continued in a utility role with the Red Sox until he was traded to the Detroit Tigers in May 1959.  “It was hard to be traded by the Red Sox,” Ted remembers.  “I had been with the organization for nine years, and I had made a lot of friends.

“But my first game with the Tigers was against the Red Sox and I hit a grand slam home run,” Ted chuckles.  “That is another lasting memory.”

After finishing the 1959 season with the Tigers he was traded to the Philadelphia Phillies where he played in 1960.  After a brief stop with the Chicago White Sox, Ted finished his active career in 1961, playing for former Red Sox teammate Sam Mele who was managing the Minnesota Twins.

When his playing career ended Ted Lepcio put his Seton Hall degree to good use.  He began his business career with the Honeywell Corporation where he worked for five years.  His next stop was St. Johnsbury Trucking where he spent 22 years, earning the title of Vice President of Sales.  Today, at age 85, Ted is still active as a consultant on transportation issues for Corsair Logistics, Inc.

In 1967 Ted Lepcio joined with Dom DiMaggio and a number of Boston businessmen to help form the BoSox Club, the official booster club of the Red Sox.  “Bill Crowley, Red Sox Public Relations Director, called Dom and I, together with a number of prominent business leaders, and we formed the BoSox Club.  As the 1967 season went on there was a lot of renewed interest in the team and the club really caught on,” Ted recalls. 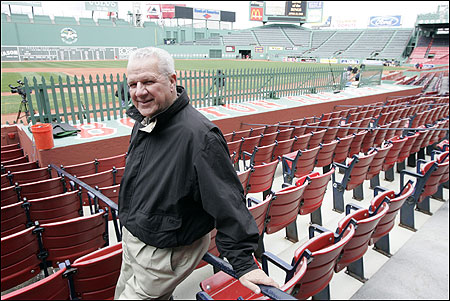 Ted was the President of the BoSox Club in 1970 and 1971.  The club continues to hold monthly luncheons throughout the Red Sox season and the BoSox Club has contributed generously to the Jimmy Fund and other worthy causes for 47 years.

Ted has been a Red Sox season ticket holder for over 40 seasons and he enjoys meeting Red Sox fans at Autograph Alley usually four or five times each season.  “I enjoy going to the games, especially when our son Thad comes on from Tennessee with his family for a visit,” Ted says.  “I have to tell you, when I’m watching a player hit a home run or turn a double play, I say to myself, ‘I can’t believe I did that!’”

The fundamentals of turning the double play haven’t changed, but Ted agrees that a lot has changed since his first game in 1952.  Reminded that in 1952, fielders still tossed their gloves into the outfield at the end of the half-inning Ted says, “I tell people that and they look at me like I must be making it up.”

And how about those flannel uniforms?  “I’ll tell you, if you played both games of a doubleheader in St. Louis or Washington in the summer, those uniforms were awful.”

All MLB travel was by train in 1952, and Ted has pleasant memories of many of those train rides.  “We would sit around and talk baseball or sometimes just talk in general.  That really gave you time to get to know your teammates.  I think today’s players miss a lot with plane travel and quick turnarounds.”

Ted Lepcio’s first game on Opening Day in Washington, DC, in 1952, is his fondest memory of his time on the field.  But his enduring memory is of the many relationships he formed.

“My relationship with Ted Williams is a very special memory.  He was an extraordinary guy and I always felt we had a chance to win with him on our side,” Ted says.

“And I am fortunate to have a number of relationships that have lasted all these years,” he emphasizes.  “I used to get to see still see my teammates Bill Monbouquette and Frank Malzone a lot,” he says, referring to two former Red Sox greats.  “But I do get to talk by phone on a regular basis to Dick Gernert, who lives in Reading, PA, and Pete Daley, who lives in California.

“To continue relationships that go back for over 60 years means an awful lot to me.”