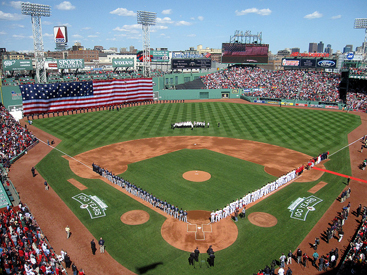 Writer and Washington Post columnist Thomas Boswell got it right with the title of his 1984 book, “Why Time Begins on Opening Day.”

It is indeed a beginning, a time of renewal, when baseball shakes off the signs of spring training and returns the national pastime to the child in us all.
Hall of Famer Early Wynn, who pitched for the Washington Senators, Cleveland Indians and Chicago White Sox, also got it right when he said, “An opener is not like any other game.  There’s that little extra excitement, a faster beating of the heart.  You have that anxiety to get off to a good start, for yourself and for the team. You know that when you win the first one, you can’t lose ’em all.”

Opening Day. No two words in the English language conjure up such anticipation. All winter we wait for it. It could rain or snow and delay the festivities for a day or two, and has.

Eventually sun shines at FenwayPark and brings out the vivid greens of grass and walls, the red, white and blue of the welcoming draped bunting and that of the huge American flag itself, and the crisp white of the home uniforms with RED SOX across the chest. 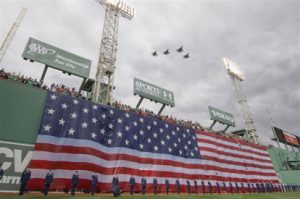 No other feeling can replace, nor can any words in the English language adequately describe, the sight of the new roster of the Boston Red Sox as the players are announced one by one, trot out from the dugout and line up along the first base line.

Established stars and fan favorites earn the crowd’s most enduring, and adoring, ovations.  Less so for those whose stars have yet to rise and for those newcomers relatively unknown to the fandom but who’ll become household names for the deeds they’ll do as the 162-game season unfolds. Even the trainers and clubhouse attendants receive a smattering of applause on this special day.

As Early Wynn noted, you want your team to win on Opening Day at home.  When it does, it’s perhaps a good omen that many, many more Ws are on deck at Fenway.  The hot dogs taste better, the soft drinks seem colder and fizzier, and the bounce in your step when you exit the park at game’s end is bouncier after a win.

The games are grand, but the pre-game ceremonies – the pomp and circumstance, if you will – often create more chills and thrills, and memories of them may be more lasting, than what goes down on the scorecard.

Emotion is the flavor of the day.  Opening Day. Who can forget the 2008 Fenway home opener, for example, when the crowd roared with applause, and forgiveness, as Bill Buckner strode in from the outfield to the mound and delivered the ceremonial first pitch?

For more than two decades he was vilified as the goat of the 1986 World Series after that slow roller down the first base line – aw, forget it, you know the story.

But after World Series championships in 2004 and 2007, all was forgiven in the spirit of Opening Day.

The next home opener, 2009, was also fraught with emotion. Battling brain cancer, valiant Senator Ted Kennedy threw out the first pitch on April 8. Actually, he served up a second baseball after the first was a short dribbler.  Senator Kennedy died in August of that year.

The home opener in 2006 saw five of the six living Red Sox from the 1946 American League championship team handle the chore.  Bobby Doerr, Dave “Boo” Ferriss, Johnny Pesky, Eddie Pellagrini, and Don Gutteridge delighted the crowd.  The other ’46 survivor, Dom DiMaggio, was in Florida. Today, only Doerr and Ferriss are living.

In 1964, Ted Kennedy’s brother, Bobby, the U.S. Attorney General, was the home inaugural’s first-pitch nominee.  As for the game, 19-year-old Red Sox rookie Tony Conigliaro homered over the left field wall onto Lansdowne Street in his first Fenway Park at-bat.

Speaking further of famous firsts, the first official game at brand-new FenwayPark was played April 20, 1912 – five days after the Titanic sank. Tris Speaker saved the day for the Red Sox, his 11th-inning RBI single giving Boston a 7-6 victory over the New York Highlanders (who became the Yankees in 1913) before an appreciative crowd of some 24,000.

The tradition of U.S. presidents’ throwing out the first pitch started April 14, 1910, when baseball aficionado William Howard Taft let it rip at the home opener in Washington, D.C.

Harry Truman doubly impressed the gathering at Griffith Stadium in Washington in 1950; the ambidextrous commander-in-chief uncorked two little stitched spheres, one with his right arm and one with his left, and the Senators would later celebrate an 8-7 Opening Day triumph over the Philadelphia Athletics.

Red Sox legend Ted Williams was a big hit on Opening Day.  The Splendid Splinter batted .449 in season openers, getting at least one hit in all 14 inaugurals in which he appeared.

The most dazzling pitching performance on an Opening Day had to have been the 1940 masterpiece woven by Bob Feller of the Cleveland Indians. Rapid Robert subdued the White Sox in chilly Chicago, 1-0, with the only no-hitter in big league Opening Day history.

After a “retirement” lasting three-plus years, Tony C returned to baseball and the Red Sox in 1975 and was received enthusiastically by the Opening Day crowd in Boston.  Conigliaro went 1-for-4 as the designated hitter in the home team’s 5-2 victory over the Milwaukee Brewers. Tony would retire for good later in the season.

Comical in retrospect but mayhem then, the 1907 Giants-Phillies opener at the Polo Grounds in New York was played in the aftermath of a major snowstorm.  With the home team trailing, 3-0, fans started throwing snowballs onto the field in the ninth inning.  Soon the most unruly in the crowd rushed the playing surface, heaving more snowballs and disrupting the game to the extent that umpire Bill Klem halted the contest and forfeited it to Philadelphia.

The Opening Day landscape is blessed, then, with all sorts of memories, at Fenway and elsewhere.  They’re in the fabric of our recollections.  And we treasure each one.  That’s why we anticipate the event, why we circle the date on our calendars, why we capitalize each word.  Opening Day.

No two words in any language can say it better.