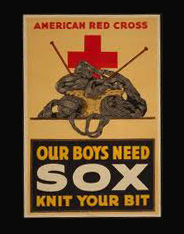 For the past 73 years the Boston Red Sox have trained under the sunny skies of Florida, or from 1959 to 1965, in the desert warmth of Scottsdale, Arizona.  But from 1943 through 1945, World War II travel restrictions required the Red Sox to hold their spring training camps north of the Mason-Dixon Line.  Red Sox players never trained further south than Baltimore, MD, and much of their pre-season conditioning was completed at Tufts University in Medford, MA,

Following the attack on Pearl Harbor in December 1941, it was unclear whether major league baseball could, or should, continue during the balance of World War II.   Baseball Commissioner Kenesaw Mountain Landis wrote to President Franklin D. Roosevelt in early 1942 asking for guidance.  FDR answered with his famous “green light” letter stating, in part, “I honestly feel that it would be best for the country to keep baseball going.”

Major League baseball had the green light to continue, but by early 1943, transportation had become a major issue since the movement of troops and supplies on the nation’s railways was the country’s top priority.  Landis ruled that all major league teams should conduct spring training camps, “north of the Mason-Dixon Line and east of the Mississippi, as close as possible to their base of operations.”

Responding to Commissioner Landis’ edict the Red Sox selected TuftsUniversity in Medford, MA, as their spring training home in 1943.  The Tufts’ campus was only about eight miles from FenwayPark and the Kenmore Hotel where players would be housed, and it offered a two-story cage where the team could work out regardless of weather conditions.  Spring training at Tufts began officially on March 22nd, but the facility was available to players who lived locally beginning on March 15th.

Red Sox training camp officially opened on March 22nd, at Tufts, and all but three players were on hand for a strenuous workout in the cage.  The second day of spring training was a sign of the times: the entire team went to the American Red Cross headquarters and donated blood.

Fortunately the fickle New England weather cooperated and the Red Sox were able to move outside on five of their days at Tufts.  Mel Webb of The Boston Globe reported that on March 27th, a crowd of about 1,000, consisting of Tufts students and local youngsters, formed a ring around the field, and “made off with practice balls fouled off towards the railroad tracks.”

The Red Sox held their last workout at Tufts on March 31st, and left by train on April 1st, to play a series of nine exhibition games ranging as far south as Baltimore, MD.  The Red Sox returned home to wrap up the pre-season with a pair of games against the National League’s Boston Braves.

The Boston Red Sox returned to Tufts University in Medford, MA, for spring training in 1944, but on a scaled-down basis.  Limited spring training kicked off in Medford on St. Patrick’s Day but only four Red Sox players participated in the light workout.  The Boston Globe’s Harold Kaese wrote, “The Red Sox began spring training at the Tufts’ College cage yesterday [March 17th] with the same zest I used to show when sitting down to practice a piano lesson.” Kaese went on to point out that the six field executives outnumbered the four players on hand.

On March 26th, manager Joe Cronin, his four coaches, and seven Red Sox players boarded a train at South Station to head for Baltimore, MD, where the whole team would assemble for one week of outdoor training.  After playing only seven exhibition games the Red Sox returned to Boston for the City Series against the Braves beginning on April 12th.

In the first game the Red Sox defeated their cross-town rivals 6-5 in a game played at Braves Field.   The Boston Globe’s Jerry Nason wrote, “a few hundred of the hardy and faithful gathered on the wind-walloped slopes of National League field.”  The Red Sox clinched bragging rights for their fans the following day with a 3-2 win over the Braves before a FenwayPark “crowd” estimated at 500.

In 1945 the Red Sox moved their spring training headquarters to Pleasantville, NJ, about seven miles from Atlantic City where the New York Yankees were holding their spring training.  The two teams scheduled nine exhibition games against one another and players were able to travel between the two stadiums by trolley car to simplify transportation.  The Red Sox trained at Ansley Field directly behind PleasantvilleHigh School.  After two weeks of work-outs together, the Red Sox kicked off their exhibition series on March 29th, defeating the Yankees before a crowd of over 5,000 at Bader Field in Atlantic City.

The Red Sox returned home for what was a scheduled five-game City Series against the Braves.  But after the Braves won the first two games at Braves Field, games three and four were cancelled as the nation mourned the death of President Franklin D. Roosevelt.

Spring training returned to normal in 1946, after World War II.  The team returned to its former spring headquarters in Sarasota, Florida, and for the 28 Red Sox players who had served their country it was an emotional reunion.  Red Sox icon Johnny Pesky spoke for everyone when he said, “We had all made it back.  A lot of people didn’t.  We were together again, and we were playing baseball.”

It is also appropriate to reflect on the sacrifices of the more than 300 baseball players with major league experience who served in the military during World War II.  And it is timely to acknowledge the contributions of the millions of Americans who served their country during this period, and who won the peace.