MIRACLE AT FENWAY BY SAUL WISNIA 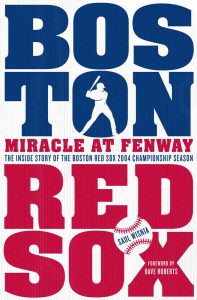 Boston Red Sox fans can never hear enough or read enough about their 2004 World Championship team.  Veteran baseball author Saul Wisnia does a wonderful job of meeting that need with his new book MIRACLE AT FENWAY: The Inside Story of the Boston Red Sox 2004 Championship Season (St. Martin’s Press).

Wisnia’s premise is that an event of this magnitude requires the passage of time to fully assess its impact.  And he achieves that objective by highlighting dozens of interviews with Red Sox players, key members of the front office, and long-time fans.

MIRACLE AT FENWAY, which has a release date of July 15, 2014, begins with a thoughtful foreword by former Red Sox outfielder Dave Roberts who will be forever remembered for “The Steal.”    The book opens with an in-depth look at Roberts’ steal in the bottom of the ninth inning of Game Four with the Red Sox trailing the Yankees 4-3.  This reminds us that Papi’s dramatic homers and Schilling’s courageous pitching never would have happened without Dave Robert’s theft of second base.

Wisnia does a nice job of providing an overview of the agony and the ecstasy of the rich Red Sox history over the years.  This will be familiar to long-time Red Sox fans and it serves as a primer for younger fans.  He also provides context and background for club owners John Henry, Tom Werner, and especially for Larry Lucchino.

To fully understand and appreciate the 2004 World Championship team you really have to have a complete awareness of the 2003 season.  The chapter titled “Cowboys Do Cry” covers the high-points—the dramatic comeback win over Oakland in the ALDS—and the low-points—Aaron _______ Boone.

The crushing defeat in Game Seven of the 2003 ALCS motivated the Red Sox front office to change managers and to fix what wasn’t working.  The book does an excellent job of describing the commitment of the organization from top to bottom.  Interviews and quotes from front office employees and Red Sox players provide the reader with a close-up of what was going on behind the scenes.

Wisnia draws on interviews with a number of long-time Red Sox fans to emphasize the importance of the team to its followers.  In the interest of full disclosure I should point out that I am featured in a brief anecdote.  It involves my wife, our Red Sox flag, and Game Four of the World Series.  To learn the rest you will have to read the book!

Obviously we all know how the story ends.  But MIRACLE AT FENWAY makes you feel as if you are reliving that once-in-a-lifetime experience and it doesn’t get any better than that for Red Sox fans.

It is hard to count the number of books that were published soon after the Red Sox won their 2004 World Championship.  The quality varied but all were rushed to publication.  By waiting ten years for proper reflection Wisnia gets it right.

Wisnia, who will be speaking and signing books at Barnes & Noble in Framingham, MA, at 7 PM on July 17, 2014, has authored a number of other baseball books including Fenway Park: The Centennial and For the Love of the Boston Red Sox.  If you are a true Red Sox fan you will want to add MIRACLE AT FENWAY to your bookshelf.