When Dwight Evans reported to spring training in Winter Haven, FL, for the 1975 Red Sox season he was very optimistic about the upcoming year.  “I knew we had a lot of talent,” Dwight said during a recent interview in his greater Boston home.   “I thought we could compete with anyone in the AL East.”

He added, “The year before we had been in first place in the division before we ran out of gas in early September.  But then we got a look at Jim Rice and Fred Lynn, who were late season call-ups, and we saw what they could contribute.  Yes, I liked our chances,” he says emphatically. 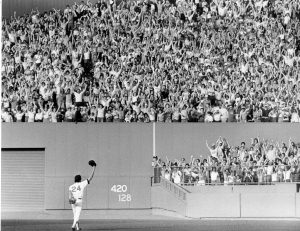 Dwight was only age twenty-three when spring training began but he was already pressure-tested.  He had been called up by the Red Sox in mid-September 1972, when the team was in the middle of a heated race for first place in the AL East.  And in 1974, he was a key contributor in the club’s early season success.

Dwight Evan’s optimism about the 1975 Boston Red Sox was well-founded.  Despite “experts” predictions that they would finish third in their division, they finished first in the AL East, won the American League pennant, and came within one game of upsetting the Cincinnati Reds in an historic World Series.  Dwight had an outstanding regular season on defense in right field and at the plate, and he was arguably the unsung hero of the Red Sox in the World Series.

Dwight Michael Evans was born in Santa Monica, California, on November 3, 1951.  His family moved to Oahu in the Hawaiian Islands when he was an infant.

“I didn’t play baseball when we lived in Hawaii, so when I moved to Northbridge, California, at age nine I had a lot of catching up to do,” Dwight recalls.  “When we moved back to California, my father took me to a Dodgers’ game and I fell in love with baseball.

“My strongest memory of Little League is doing chores on my Grandfather’s little farm to earn the money for the registration.  We didn’t have a lot of extra money when I was growing up,” he acknowledges.

“I never thought of a professional career until I realized the scouts were watching me as a senior,” Dwight says.  “And it’s funny, I heard from a lot of big league teams, but not the Red Sox.  I was really surprised when they picked me in the June draft.”

The Red Sox selected Dwight in the fifth round of the 1969 draft and they assigned him to their minor league team in Jamestown, New York.  “The minors were a big adjustment for me,” Evans remembers.  “I was just a kid [17-years-old] and I had never been in the east.  I wasn’t sure I belonged in Jamestown with the others.”

Dwight moved quickly through the minors and in 1972 he was promoted to their AAA team in Louisville, Kentucky.  “I got off to a slow start in Louisville,” Evans says, “but Daryl Johnson told me that I was his right fielder whether I hit .100 or .300.  That helped me to relax.”

He hit .300 at Louisville and he was named the MVP of the International League MVP for 1972.  His stellar play that season earned him a September call-up to join the Red Sox in the midst of a tight pennant race.  He became a regular outfielder for the Red Sox on September 18, 1972, and he played in the last 17 tension-filled games. 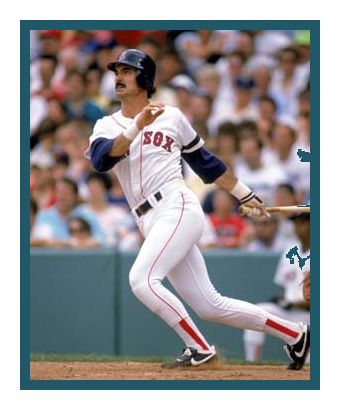 “I felt comfortable in the outfield from my first game in the major leagues,” Dwight says.  “Fielding came naturally, but it took me a long time to get comfortable at the plate.  The pitching is better but the defensive play is even better in the majors.”

What was Dwight’s first impression of Fenway Park?  “I couldn’t get over how beautiful the park was.  I was surprised at how big the left-field wall was and how close it seemed.  I have always loved FenwayPark.”

When training camp opened in March 1975, Dwight Evans had already played in more than 250 games for the Boston Red Sox.  After two full seasons as a regular and an important role in a third season he was nearly a major league veteran, but still one of the younger players on the team.  Rookie Jim Rice was one year younger at age 22, and rookie Fred Lynn was the same age as Evans at 23.

The “Gold Dust Twins,” Rice and Lynn, received the most attention in the Red Sox camp.  How did Dwight Evans feel about the focus on Rice and Lynn?  “I was thrilled to be out of the spotlight,” Evans emphasizes.  “I never wanted any individual attention. 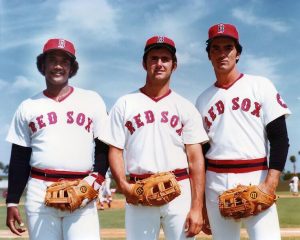 “And I was very happy that they were going to join us in 1975.  We all saw what they could do the previous September.” he says.  “I was convinced that they were two of the missing pieces and they would help us get to the next level.”

When the Red Sox left Winter Haven at the end of spring training, Peter Gammons wrote: “Pennant potential, but too many questions to pick them on paper in April.”  Yet Dwight Evans still retained his initial optimism.   “I felt good about our chances from the beginning of spring training to the end of the season.”

When the regular season began, both the Red Sox and Dwight Evans got off to a slow start.  The Red Sox got back on track first.  After finishing April in fifth place, the club reached first place in the East Division in late May, and they were either first or second for the rest of the season.

Bothered by hamstring and shoulder injuries, Evans’ batting average hovered around .230 through the 1975 All-Star game.  “I would never use injuries as an excuse,” Dwight says.  “The fact is I was always a slow starter.  When the weather warmed up, so did I!”

The Red Sox took over first place on June 29, 1975, and with a record of 55-35 the rest of the way they never relinquished that lead.  And as predicted, when the weather warmed up Dwight Evans’ bat heated up.  He batted .327 after the All-Star break to raise his average to a very respectable .274 for the season.

“Growing up in Hawaii and California the weather in the north early in the season was totally foreign to me.  I never really got used to playing ball in Boston and the north in April and May,” Dwight admits.

Asked if he remembered one key moment during the Red Sox drive for first in the east, Evans responds, “Not really.  We were confident throughout the year and we were very consistent all season.

“But I do think the addition of Denny Doyle in June to play second base was important to our success,” he acknowledges.  “He settled our infield and he provided a spark.  We got him for his defense but he hit well [.310] for us also.”

The Red Sox clinched the East Division crown in late September and they prepared to meet the heavily-favored Oakland A’s in the American League Championship Series.  “Nobody thought we had a chance,” Evan recalls 50 years later.  “But we knew we were better than Oakland and we swept them in three straight.”

The Cincinnati Reds and “The Big Red Machine” were even bigger favorites than the A’s when the 1975 World Series began.  “We were used to being the underdog by then,” Evans says.  “I think we used that to our advantage.”

The 1975 World Series is considered one of the great Fall Classics of all-time.  Five of the seven games were determined by one run, two games went into extra innings and the lead changes were too numerous to count.  The MLB Network named Game Six as the greatest game of the last 50 years.

Dwight Evans had an outstanding World Series for the Boston Red Sox. He batted .292, drove in five runs, and tied Game Three with a ninth inning two- run home run.  And in the eleventh inning of Game Six he made what Reds’ manager Sparky Anderson called “The Greatest catch I have ever seen under the circumstances.” 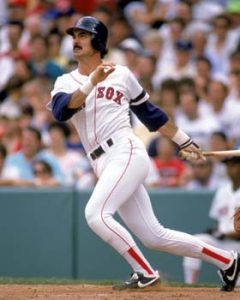 The score was tied 6-6 in the eleventh when the Reds’ Joe Morgan hit a line drive that was clearly headed for the seats in the right field grandstand.  Here’s how Dwight Evans remembers his outstanding catch.  “It wasn’t my best catch, but it was my most important one.  I anticipated that the ball would drift towards the right field line, but it stayed straight as an arrow.  It was a great thrill to catch that ball.”

“We were all disappointed when we lost Game Seven to the Reds,” Dwight says.  “We felt we had played as well as the Reds and it could have gone either way. 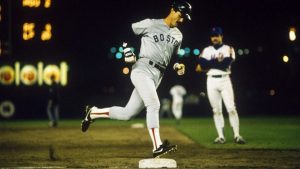 At various times in his 20-year career he led the American League in runs, home runs, walks, and on-base-percentage.  And as good as he was on offense, he was even better on defense, winning eight gold gloves, the most in Red Sox history.  He has been retired for 14 years but he still ranks in the top 100 players in major league history in ten important categories (see table).

And where did he get the nickname Dewey?  “Boy, I wish I had an interesting story to tell you,” Dwight answers, “but I don’t!  When I was playing in the minors we all gave one another nicknames.  Mine was Dewey and it stuck.  I’ve learned to like it,” he laughs.

Dwight Evans and his wife still make their home in the greater Boston area.  Their three children are all grown and Dwight enjoys being a grandfather.

Dwight was the Red Sox hitting coach in 2002, and in 2003 he was named a Player Development Consultant for the Red Sox, a position he still holds.  “I work with the young players in the Red Sox minor league system and I love it.  I do a lot of my work in Pawtucket and I’ve worked with a number of young players who are going to have great careers.”

What message does Dwight Evans have for Red Sox fans?  “Red Sox fans are great,” he replies.  “I learned early in my career that if you give an all-out effort they will always support you.  If a player lets up, even briefly, fans are all over him.  And that’s fair.

“I want to thank them for supporting me all these years, right up to the present.  Red Sox fans have always been good to me.”