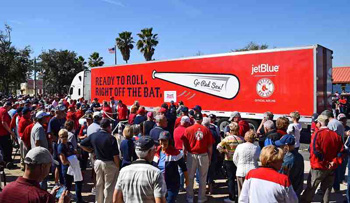 Now that the Red Sox equipment truck is headed to spring training in Fort Myers, FL, the 144th consecutive season of professional baseball in Boston is underway!  We are celebrating by changing our masthead above to note this fact.

Perhaps it is our long history that makes the departure of the Red Sox equipment truck such a big deal. In no other city do hundreds of fans gather with full media coverage to bid adieu to the truck.

In the Bronx, the Yankees biggest fear is that their equipment truck will be hi-jacked. And across town, the Mets and the Wilpon family worry that the truck will be seized and awarded to their creditors.

In Philadelphia only a few hardy fans congregate to boo the truck drivers. Remember, this is the same city that once booed Santa Claus!

From 1871 to 1900, the Boston Red Stockings/Beaneaters were the dominant team in professional baseball.  And in the first two decades of twentieth century the Red Sox won five World Championships and the 1914 Miracle Braves won another.

During the first 50 years of professional baseball, Boston was the world capital of baseball. Now with three World Championships in the last ten seasons, Boston is back on top.