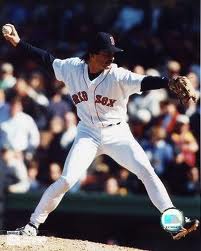 On March 21, 1972, the Boston Red Sox traded relief pitcher Sparky Lyle to the New York Yankees for first baseman Danny Cater.  This may not have been the worst transaction in Red Sox history—the sale of Babe Ruth to the Yankees is the hands-down winner of that award—but it is probably the worst spring training trade in Boston baseball history.

Lyle helped the Yankees win two World Championships, he was a three-time All-Star, and he won the Cy Young Award in 1977.  Danny Cater, who had killed Red Sox pitching before he was acquired, hit .only 262 with one home run during three disappointing seasons in Boston.

But over the years the Red Sox have made several outstanding trades during spring training.  On March 30, 1978, the Red Sox acquired Dennis Eckersley, along with catcher Fred Kendall, from the Cleveland Indians in exchange for four players including pitcher Rick Wise.  In 1978, Eckersley won 20 games for the Red Sox, helping the team to 99 victories and a share of the American League East title.

On March 28, 1986, the Red Sox traded Mike Easler to the Yankees for designated hitter Don Baylor.  Baylor was a key part of the offense for the 1986 American League Champion Red Sox and he was the clubhouse leader.  The late Lou Gorman, who engineered the trade for Baylor, told me in a 2002 interview, “I had Baylor in Baltimore and I knew he would be the catalyst the team needed to come together.”

The worst Red Sox spring training transaction took place at the end of training camp in 1908.  The team couldn’t pay their landlord, so they left behind a spare outfielder, Tris Speaker, to play for the Little Rock, AR, minor league team as payment.  Fortunately, the Red Sox were able to re-acquire Speaker since he went on to play nine outstanding seasons for Boston and he was elected to Baseball’s Hall of Fame based on a distinguished 22-year MLB career!

We may see a trade or two this spring given the surplus of Red Sox outfielders.  But General Managers tell me they play the first two months to assess their strengths and weaknesses.  Then in June and July they leverage their strengths and fix their weaknesses through trades and player acquisitions.  The Red Sox team we see this August and September may look very different from the team that leaves Fort Myers at the end of March.