How Many Wins Can A New Red Sox Manager Produce? 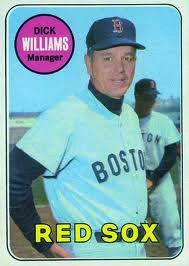 New manager John Farrell was hired by the Red Sox to get the team back to the playoffs. What does history tell us about new Red Sox managers and improved win totals?

The Red Sox fired Billy Herman at the end of the 1966 season and replaced him with 37 year-old firebrand Dick Williams. Williams took the Red Flops of 1966 and turned them into the Impossible Dream team that re-captured New England’s heart in 1967.

The biggest improvement for a new Red Sox manager came in 1912, when Jake Stahl replaced Patsy Donovan. In 1912, the year that Fenway Park opened, the Red Sox win total improved by 27 games. A 27-win gain would give the 2013 Red Sox 96 victories: more than the win total of any American League team in 2012.

But the gold standard for improvement is Walpole Joe Morgan in 1988. The Red Sox fired John McNamara in mid-season and the team won 19 of its first 20 games under interim manager Morgan. The hot streak propelled the Red Sox into the playoffs and exorcised the “interim” from Joe’s title.

Everyone realizes that a new manager has to have talented players to succeed. Casey Stengel managed the Boston Braves from 1938 to 1943 and never finished higher than fifth place in the National League. Stengel later managed the New York Yankees to ten American League pennants, and seven World Championships from 1949 to 1960.

The most dramatic manager change in Boston baseball history occurred in 1929 when Braves’ owner Judge Emil Fuchs fired Rogers Hornsby and took over as manager himself. With owner Fuchs at the helm the Braves won six more games in 1929 than 1928. The next season Fuchs fired himself, picked Bill McKechnie as his replacement, and the Braves improved by 14 wins!

Regardless of how 2013 turns out for Farrell, he would do well to heed the words of former Braves pitching-great Warren Spahn. Spahn, who played for Stengel with the Boston Braves and then later when Casey managed the 1965 New York Mets to 105 losses, said, “I played for Casey Stengel before and after he was a genius!”