When Bernie Carbo reported to spring training in Winter Haven, Florida, in February 1975, he had no idea that the upcoming season would be one of the most celebrated years in Red Sox history. “I knew we had a lot of talent,” Bernie said in a recent interview, “but I certainly wasn’t thinking about the World Series when training camp opened.” 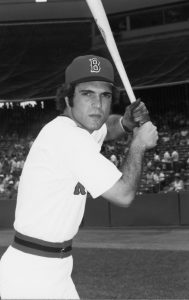 Outfielder Carbo was starting his second season with the Red Sox and he recalls the team’s strong start in 1974. “We had played well in 1974 and we were in first place in the East Division in early September. But then we ran out of gas,” he says referring to the team’s third place finish in the AL East.

Carbo, who had split his time in 1974 between left and right field with an occasional start at DH over 117 games, knew he had would have to fight for playing time in 1975. “We had Yaz, Rick Miller, Dwight Evans, and Juan Beniquez coming back with Fred Lynn and Jim Rice joining us after playing in September in 1974. I knew I was going to have to play hard that spring to get a chance.”

Most seasoned baseball observers shared Carbo’s skepticism regarding the Red Sox chances in 1975. The consensus from a poll in the Sporting News was that the team would finish third in the AL East. The Baltimore Orioles were favored to win their third straight AL East title and the Yankees were seen as the strongest contender.

The Red Sox were beginning their tenth spring in Winter Haven, FL, a small community of about 25,000, located between Orlando and Tampa. The best description of downtown Winter Haven was “low-key.”

“I really liked Winter Haven,” Bernie Carbo insists. “It was a small town and everyone was friendly. My family enjoyed spending time there every spring.

After a visit to Cyprus Gardens in Winter Haven, billed as “the oldest tourist attraction in Florida,” the Red Sox were the only game in town for visitors in late February and March. Always a fan favorite, Bernie recalls, “Just about anyone you met was a Red Sox fan. It was fun to talk to them and you realized what loyal fans the team had.” 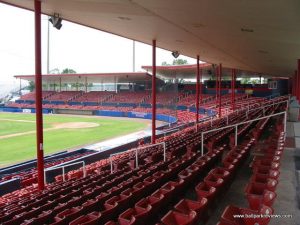 Chain O’ Lakes Park, the Red Sox spring home, was located one mile down the street from the club’s headquarters at the Holiday Inn. The picturesque ballpark backed up to 315 acre Lake Lulu and had a seating capacity of 3,809. In 1975, box seats were available for $3 and general admission was only $2.

Ticket prices were reasonable but sellouts were rare. A match-up with the Detroit Tigers from nearby Lakeland would fill the seats, and the Yankees would pack fans in, but in 16 home games the Red Sox drew an average of only 2,230 fans in 1975.

The 1974 Red Sox, under first-year manager Darrell Johnson, had teased Boston fans by opening up a seven-game lead in the American League East on August 23. Red Sox fans began to look forward to a return to the postseason for the first time since 1967.

Led by stellar starting pitching from Luis Tiant and Bill Lee, and sparked by a potent offense, the team peaked with a record of 70-54 in late August. But injuries and a lack of pitching depth caught up with them and they finished seven games behind the division-winning Baltimore Orioles.

Manager Johnson was hopeful that the Red Sox could improve on their 1974 performance. He told reporters early in the 1975 spring training camp, “If we can stay healthy, we can do it all,” Johnson said. “We had so much bad luck last year, maybe things will turn around for us this year. We have to hope so.”

Johnson acknowledged to the media that his first year as a major league manager was a bit of a learning experience. “I think I will be able to look at the big picture better. I may be a little tougher,” he added, “but I’m not going to change who I am.”

Pitching depth, both starting and relieving, was the number one concern for the 1975 Red Sox. “I thought the pitching could improve in 1975,” Carbo says. “I felt Roger Moret had a lot of potential and I knew that Dick Drago and Diego Segui could give us what we needed out of the bullpen.”

Potential starting pitcher Rick Wise was the biggest question mark on the Red Sox pitching staff. Wise had been acquired along with Carbo, from the St. Louis Cardinals before the 1974 season and he was expected to produce 15-17 wins per season.

But Wise made his Fenway Park debut on a miserable April day in 1974, after a 12-day layoff following spring training. “I pitched a complete game on a cold damp day, and ended up with a torn triceps muscle,” Wise recalls. “I tried to pitch through it, but that basically wiped out my whole season.”

“I had played with Rick in St. Louis and he was a good friend,” Bernie says. “He was hurt all through 1974, but I knew how badly he wanted to pitch. I knew if he was healthy in 1975 he would make a big contribution,” Carbo says.

Rick Wise pitched well in spring training and he was confident he would have a big year in 1975. “The x-rays of my shoulder during the 1974 season didn’t show anything, but my x-rays that winter showed the triceps tear. I designed my own rehabilitation program and got it restored. I felt great in spring training,” he emphasizes.

The biggest excitement of 1975 spring training surrounded potential star outfielders Jim Rice and Fred Lynn. Both players had been early draft choices and they had moved quickly through the Red Sox minor league system. Rice had been called up to the Red Sox in mid-August of the previous season, Lynn made his major league debut in September, and both players made a strong first impression.

“I knew that Jim Rice and Fred Lynn were terrific young players,” Bernie says. “We all did. We could see it in September 1974 and it was obvious in spring training.

“But it never occurred to me that they would be as good as they were as rookies. There were stretches in 1975 when they carried the team,” he remembers. “I don’t think any pair of rookies ever had the kind of impact on a team that Jim and Fred did for us.” 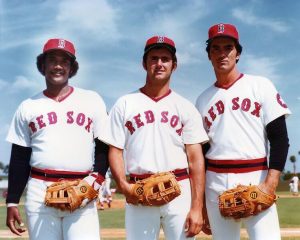 Another big story in spring training was the comeback attempt of Red Sox legend Tony Conigliaro. After spending three seasons in retirement Tony convinced the team to give him a tryout.

“When I first heard about Tony’s comeback I wasn’t that supportive. But when I learned about his history and what he had gone through, I was impressed. Then when I saw how hard he worked, I began rooting for him,” Bernie recalls. “When he had to call it quits, I felt badly.”

One reason that the 1974 Red Sox team faded late in the season was the injury to Carlton “Pudge” Fisk on June 28. The Cleveland Indians’ Leron Lee had crashed into Fisk on a play at the plate and Pudge’s knee was torn apart as a result of the collision, ending his season.

Fisk eased into spring training making his first appearance on March 11, 1975, against the Montreal Expos. He felt good after his debut and Pudge was back in the lineup against the Tigers the next day. But in the fifth inning a pitch thrown by Fred Holdsworth fractured Fisk’s right forearm. Pudge would miss at least the first two months of the season.

“Losing Pudge was a big blow,” Bernie agrees, “but I had confidence that Bob Montgomery could hold down the fort. We needed Fisk’s leadership and power, but Monty was an excellent back-up.” 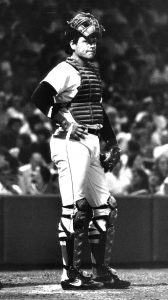 Bernie Carbo had an outstanding spring. He batted .325 with two home runs and he played well in the field. Looking back Bernie credits two Red Sox coaches with helping him to prepare. “Don Zimmer [third base coach] knew me and he knew my swing. Zim had managed me in Knoxville in 1967, so he had lots of good advice.

“And Johnny Pesky [first base coach] was so great,” Bernie says. “He always had a smile for me and he knew so much about playing the game. I loved Johnny Pesky.

“But the highlight for me at spring training every year,” Bernie says smiling in memory, “was listening to Ted Williams and Bobby Doerr talk hitting. I could have spent all day listening to them they were so interesting. It was just a treat listening to the two of them go at it,” Bernie remembers.

HEADING BACK TO BOSTON

When the Red Sox broke camp in 1975, to head north to open the regular season Peter Gammons wrote in the Boston Globe: “Pennant potential, but too many questions to pick them on paper in April.”

And how did Bernie Carbo feel now that he had seen the team in action for five weeks? “I felt we would be competitive. We were a strong team with a lot of potential when we started the season.

“I thought the pitching looked better,” he says. “I thought Rick Wise would have a great year for us. And I was sure Fred Lynn and Jim Rice would really help us.

“But did I think we would end up in the World Series and come within one game of beating the Big Red Machine Cincinnati Reds? I never thought that for even a second!” he exclaims and adds, “That was beyond my wildest dreams.”

But that is exactly what happened. And Bernie’s eighth inning three-run homer, tying Game Six of the 1975 World Series, is remembered by all Red Sox fans. “That home run has changed my life,” Bernie says emphatically.

Speaking of his previous alcohol and substance addictions, Bernie explains. “My life bottomed out in 1993, and the Baseball Assistance Team literally saved my life, getting me into recovery from my addictions.

“After my recovery I founded The Diamond Club Ministry to help others with addictions and to spread my message of the Gospels. Because of that Game Six home run in 1975 everyone in New England and fans around the country know me,” he says. “And every summer when I come back to New England, doors open to me so I can spread the message of The Diamond Club Ministry and help others.”

The 1975 Red Sox headed back to Boston with lots of question marks. Would Rick Wise stay healthy and be able to deliver the 15-17 wins the pitching staff needed? Could Bob Montgomery fill in adequately for Pudge Fisk and keep the Red Sox close? Were Fred Lynn and Jim Rice as good as they looked?

As the 1975 season unfolded it turned out the answers to all of those questions were “yes.” And 47 years later the 1975 Boston Red Sox season remains one of the more memorable years in team history.