The 1975 season is among the most memorable in the rich history of the Boston Red Sox.  In spring training the club was predicted to finish in third place at best in the AL East.

But the “Gold Dust Twins” Jim Rice and Fred Lynn, put together two of MLB’s best rookie seasons ever, veteran Carl Yastrzemski played like he had found the Fountain of Youth, and the Red Sox led the league in runs scored.

Pitching was a big concern when training camp opened but the “Big Three” of starters Luis Tiant, Bill Lee, and Rick Wise combined for 54 wins in tandem with a strong bullpen. 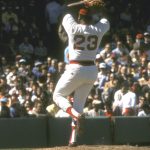 When 1975 drew to a close, the Red Sox had won the east division, swept the defending World Champion Oakland A’s in the ALCS, and thrilled the country by taking the heavily favored Cincinnati Reds to seven games in an epic World Series!

Second-year manager Darrell Johnson had guided the 1974 Red Sox to a third place finish after holding on to first place as late as September 8.  Johnson hoped that a comeback by Rick Wise, who was injured for most of 1974, and the addition of Rice and Lynn would put the team over the top in 1975.

Outfielder Bernie Carbo, who was starting his second season with the Red Sox, liked the team’s chances when spring training ended.  In a recent interview Bernie said, “That was a very strong team.  We had veterans like Yaz and Rico Petrocelli, and younger players like Dwight Evans and Rick Burleson were coming into their own.” 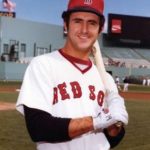 And what about rookies Rice and Lynn  “They were the best looking pair of rookies I have ever seen,” Bernie insists.  “They were so good they didn’t look like rookies.”

Rice and Lynn were the big spring story, but the sub-plot was the comeback of Red Sox hero Tony Conigliaro, who had sat out the three previous seasons.  On Opening Day Tony C batted cleanup and he received a three-minute standing ovation when he singled in his first at-bat.

Tony’s comeback was brief—he was optioned to Pawtucket in June—but his courageous effort was a harbinger of a magical season.  And there was magic in Fed Lynn’s bat in the game at Tigers Stadium on June 18.

Rookie Lynn hit three home runs, and added a triple and a single to drive in ten runs while accumulating 16 total bases, as the Red Sox walloped the Tigers 15-1.

Fred recalled, “I had gone hitless the night before.  I took extra batting practice before my big game, and I was ‘in a zone’ the whole game.”

It wasn’t magic, just hard work that returned starting pitcher Rick Wise to All-Star form.  When Wise took the mound against the Yankees on June 27, the Red Sox were in second place.   His 8-1 win over New York put the Red Sox into first place and started Wise on a streak of nine straight wins. 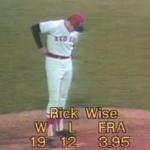 In June the Red Sox made a key acquisition picking up Denny Doyle from the Angels to play second base.  Ironically, Doyle was available because rookie Jerry Remy had taken Denny’s job as the starting second baseman in Anaheim. Doyle hit .315 for the Red Sox and solidified the infield defense.  “Doyle was quiet,” Bernie Carbo recalls, “but he led by example.”

The New York Yankees held on to second place throughout July, shadowing the Red Sox.  When the two teams squared off for a doubleheader in Queens, New York at Shea Stadium on July 27, the Yankees trailed the Red Sox by eight games.

A disappointed New York crowd of 53,631 watched Bill Lee shut out the Yankees 1-0 in the opener.  Lee was aided by a sensational Fred Lynn catch, and the winning run was delivered by back-up outfielder Rick Miller. 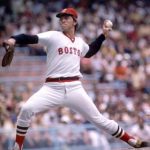 After the game, Lee said, “They [the Yankees] had to win so Lynn’s catch just finished the killing.”  Then in the nightcap Rogelio Moret shut out the Yankees 6-0, effectively ending the Yankees’ chance to contend in 1975.

When the calendar flipped to August the Red Sox, who had gone 22-11 in July, held a nine-game lead over the Baltimore Orioles.  While Lynn’s sensational play received the most attention, fellow-rookie Jim Rice was quietly putting together a remarkable season.

Jim’s batting statistics improved monthly, and he became the everyday leftfielder in July.  He did not make an error in 90 games at that position in 1975!

The depth of the 1975 Red Sox allowed the team to spend most of the season in first place.  Catcher Carlton Fisk missed the first 70 games after breaking his arm in spring training, but Bob Montgomery filled in capably and Fisk returned in late-June, batting .331 over the balance of the season.

“Guys like me, Rick Miller, Juan Beniquez and Cecil Cooper would have been regulars on any other team,” Carbo says.   Bill Lee agreed with Carbo but pointed out the importance of shortstop Rick Burleson.  “Burleson was our one indispensable player,” Bill said.  “Fortunately he only missed 36 innings all year.”

One more test remained for the 1975 Boston Red Sox.  The defending east division champion Orioles managed to climb into contention and when the two teams met at Fenway Park on September 16, Baltimore was 4.5 games back with 12 games remaining.

Veterans Luis Tiant and Jim Palmer matched up before a full-house at Fenway in what Carbo describes as, “like a heavyweight fight.”  When the nine rounds, or innings, were over, Rico Petrocelli and Pudge Fisk had hit solo home runs and Luis had shut out the Orioles for a 2-0 win.

Luis Tiant calls 1975 his most memorable season.  He won 18 games, but what he remembers best is being reunited with his parents. 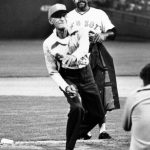 Senators Edward Brooke and Ted Kennedy had persuaded the Cuban government to allow Tiant’s parents to travel to Boston for a visit in mid-September.  “I hadn’t seen my parents in many years.  It meant everything to me to have them there with us.”

After the “knock-out” of the Orioles on September 16, the Red Sox coasted to 95 wins for the season and the AL East Division championship.  The only negative was losing Jim Rice for the balance of the season when he was struck on the wrist by a Vernon Ruhle fastball on September 21.

The Boston Red Sox went through the defending World Champion Oakland A’s in the 1975 ALCS like a hot knife through butter.  The pitching of Luis Tiant, clutch play by Carl Yastrzemski and two saves by Dick Drago led the Red Sox to a three-game sweep.

The 1975 World Series against the Cincinnati Reds was one of the best Series in baseball history.  Every game was heart-stopping and the MLB Network selected Game 6 as the greatest game played in the last 50 years. 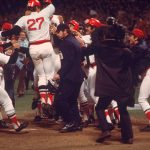 Interest in baseball had declined in the early ‘70s, but the TV audience had been captivated by Game Six and a record number of viewers tuned in for the series-deciding Game 7.  The Red Sox fought the Reds to a draw into the ninth inning of Game Seven before when the magic came to an end with a 4-3 loss to the Reds.

Bernie Carbo, who was a hero in Game Six, says, “I know only one team can win the World Series.  But I think both teams won in 1975.”

One thing is certain.  Baseball fans in general and Red Sox fans in particular were all winners in 1975.