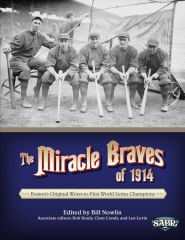 “As the president of the Boston Braves Historical Association, I’ve taken on the challenging assignment of keeping alive the memory of a ball club that abandoned the city of its birth over sixty years ago.  Each year I’m aided in this daunting task by the recollection of a never to be forgotten (some might even say miraculous) performance a century ago by the Boston Braves during the second half of the 1914 baseball season.  That event not only is an integral part of the history of our National Pastime but also a source of eternal optimism for those sports fans of under-performing teams and perennial underdogs.

Once a dominating franchise during baseball’s early days, the Braves had been in a serious state of decline for many years prior to 1914.  Some of that deterioration could be attributed to the birth of the American League in 1901 and the introduction of the Red Sox as a neighboring competitor.  Weakened by the Junior Circuit’s player raids, frequent changes in ownership and an obsolete ballpark, the Braves struggled both on the field and at the gate.  Even their band of loyal followers, the Royal Rooters, had shifted their allegiance to the Red Sox.  New owner James E. Gaffney, a New Yorker with ties to Tammany Hall,  sought to reverse the team’s fortunes.  After residing in the National League’s basement for four consecutive seasons, Gaffney’s Braves surprisingly ascended to fifth place in 1913, led by the irascible George Stallings in his first year at the Tribe’s helm.  Gaffney also laid out plans to construct a state-of-the-art modern concrete and steel ballpark at the site of a former golf club a little over a mile away from Fenway Park.  Still, expectations for the following season were modest: a return to the Senior Circuit’s first division — a feat not accomplished since 1902.

Mired in the National League cellar in mid-July, the rag-tag ’14 Braves not only rose from eighth to first place in a little over two months, this legendary ball club finished atop the Senior Circuit’s standings an amazing 10 ½ games ahead of its nearest rival, John McGraw’s Giants.  Much of the credit belonged to the tough and often profane Stallings who once described his team as comprised of “one .300 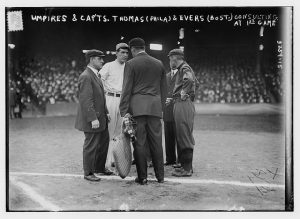 hitter, the worst outfield that ever flirted with sudden death, three pitchers, and a good working combination around second base.” [1] To capture the pennant in the face of his roster’s limitations, Stallings adeptly refined the art of platooning to capitalize upon strengths and mitigate weaknesses.  Eminent baseball writer, historian and statistician Bill James regards the Braves’ skipper’s skillful maneuvering in 1914 as having an “almost revolutionary impact” on baseball managers.[2]  However, despite such adept leadership and a half-season of heroics, the Braves were given little chance of besting the mighty Philadelphia Athletics in the World Series.  Their Fall Classic sweep of the highly favored Mackmen was the final piece needed to forever brand this ball club, the “Miracle Braves.” 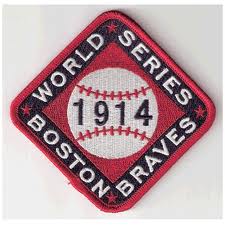 The Tribe’s extraordinary achievement one hundred years ago perennially gets dusted off by the media during the dog days of summer whenever a bottom-dwelling ball club exhibits some signs of life.  An unexpected winning streak that ignites a spark of hope among a franchise’s heretofore frustrated followers often leads them to pose the question: If the Miracle Braves could do it, why not us?  The front offices of such clubs are challenged not to throw in the towel and begin rebuilding efforts while their team still retains the glimmer of a chance of replicating the Tribe’s legendary 1914 climb to the top of the standings.

Divisional play and an expanded playoff structure have enhanced the odds that a 21st century version of the Miracle Braves will emerge and follow in the ancient footsteps of Stallings’ warriors.  However, Boston will always retain its place as the original “Home of a Miracle” when it was the ‘Home of the Braves.’”

In addition to his role as president of The Boston Braves Historical Association, Bob Brady is the Associate Editor of a wonderful new book: The Miracle Braves of 1914: Boston’s Original Worst-to-First World Series.  To order a copy of this book go to:

Or you may purchase a copy through Amazon.