Tim Wakefield achieved many individual honors during his 17-year career with the Red Sox.  He was an All-Star, he pitched the most innings (3,006), and started more games (463) than any pitcher in Red Sox history.  But being a part of the 2004 World Championship Boston Red Sox was the biggest on-field thrill of his career.

“To be a part of the team that brought a World Championship to Boston for the first time in 86 years was the ultimate team experience,” he emphasizes.  “After fighting back from a three-game deficit in the ALCS against the Yankees, we knew we would win the World Series.  I was so proud to be a part of that team.”

Tim Wakefield didn’t just talk the talk, he did everything he could to help his team during his outstanding 17-year career with the Red Sox.  He moved from starter to reliever, sometimes relieving between starts, whenever and wherever he was needed.

Looking back on Tim Wakefield’s baseball career, he was the longest of long-shots to become one of the premier knuckleball pitchers in MLB history.  After an outstanding baseball career at EauGallieHigh School in his native Melbourne, FL, he set career home run records at Florida Tech, and he was drafted by the Pittsburgh Pirates as a first baseman in 1988.

After two difficult seasons in the Pirates minor league system, it was clear that Wakefield would never make it to the big leagues as a hitter.  Rather than release him, the Pirates decided to try to make him a pitcher—a knuckleball pitcher.

“I used to throw the knuckleball now and again warming up with my teammates,” Tim recalls.  “Some of the Pirate coaches saw my knuckleball and convinced management to give me a chance as a pitcher.”

Tim’s first exposure to the knuckleball came in his backyard, playing catch with his father, Steve Wakefield.  “We played catch all the time,” Tim remembers, “and eventually he would start throwing his knuckleball.  I hated that because it was hard to catch, but he taught me how to throw it.”

It took some time to adjust to his new role, but Wakefield won 15 games for the Carolina Mudcats in 1991, and he was 10-3 with the Triple-A Buffalo Bisons in 1992.  “I had pitched some in high school so I was comfortable on the mound, but I seldom threw the knuckleball in high school.  It was a big adjustment to throw it on almost every pitch,” he says.

THE TOAST OF PITTSBURGH

Based on his strong showing at Triple-A, the Pirates brought Tim Wakefield to the big leagues and he won his first start 3-2, defeating the St. Louis Cardinals on July 31, 1992.  Tim went 8-1 for the Pirates over the final two months of the season and his Cinderella-like streak continued into the NLCS Series against the Atlanta Braves.

Wakefield threw two complete game victories to give the Pirates a chance at the 1992 NLCS Championship.  And if the Pirates hadn’t suffered a heart-breaking loss in Game Seven, Tim Wakefield was in line for the NLCS MVP Award.

In 1993, Wakefield began the season in Pittsburgh but he was demoted to Carolina, and in 1994 he spent the season with Triple-A Buffalo where he continued to struggle.  After spring training in 1995, he was released by the Pittsburgh Pirates.

Tim Wakefield was an unemployed knuckleball pitcher for less than one week when Red Sox general manager Dan Duquette recognized his potential and quickly signed him to a minor league contract.

As fate would have it, Hall of Fame knuckleball pitcher Phil Niekro was managing the Colorado Bullets women’s baseball team that shared City of Palms Park in Fort Myers, FL, with the Red Sox.  Duquette arranged to get Wakefield together with Niekro to learn from the 24-year MLB veteran.

“Spending time with Phil Niekro before the 1995 season helped resurrect my career,” Tim Wakefield says.  “Learning from a veteran who won over 300 games with his knuckleball built my confidence.

“Phil [Niekro] emphasized that the knuckleball can come and go in terms of its effective, even from inning to inning.  He impressed on me the importance of believing it would come back, in maintaining my confidence.”

After a brief tune-up in Pawtucket, Wakefield was called up to Boston and he proceeded to go 14-1 in his first 17 starts.  He ended the season at 16-8, and helped the Red Sox to the East Division Championship. 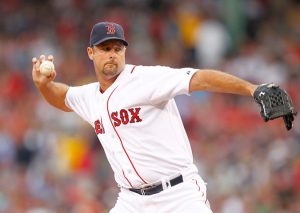 During his first four years, 1995-1998, with the Red Sox, Wakefield averaged almost 15 wins per season pitching primarily as a starter.  From 1999 to 2002, he was used mostly in relief, even filling in as a closer for manager Jimy Williams in 1999.

SO NEAR AND YET SO FAR

In 2003, manager Grady Little returned Wakefield to the starting rotation and he responded with 33 starts, 202 1/3 innings, and 11 victories.  And he was a mainstay in the hotly-contested ALCS against the Yankees.

In Game One at Yankee Stadium, Wakefield pitched six strong innings to defeat New   York ace Mike Mussina 5-2.  Then in Game Four at FenwayPark, Tim held the Yankees to one run over seven innings, tying the Series at two games each.

With the Red Sox leading 5-2 as the Yankees batted in the eighth inning, for the second time in his career Wakefield was the leading candidate for the league Championship Series MVP.  But the Yankees tied the game, and Wakefield was summoned to hold the Yankees in the last of the tenth.

Pitching on only two days rest, Wakefield retired the Yankees in order.  When the Red Sox failed to score in the top of the eleventh, he returned to the mound to face the Yankees’ Aaron Boone.  Boone hit the first pitch from Wakefield into the leftfield stands to win the game and the ALCS.

Tim Wakefield was devastated.  “I felt like I let my teammates down and that I was the goat.  I really believed I was the new Bill Buckner,” he says.

Wakefield continued to believe he was the goat until the annual Boston Baseball Writers Dinner in January 2004.  When he was introduced to the crowd of nearly 1,000 fans, he received a standing ovation that rocked the ballroom of the Sheraton Boston Hotel.

“When I heard the fans that night, I realized they remembered the things I had accomplished over my nine seasons with the Red Sox.  That was really gratifying,” he says.

THE ROAD TO A WORLD CHAMPIONSHIP

In 2004, new manager Terry Francona continued to use Wakefield as a regular starter.   He started 30 games, and pitched six or more innings in 21 of his starts.

After sweeping the Angels in the ALDS, the Red Sox headed to New York for their rematch with the Yankees in the ALCS.  Unfortunately, the team dropped two games in Yankee Stadium and things looked grim in Game Three at Fenway when the Yankees scored 11 runs in the first four innings.

It was clear that Game Three was lost and the Red Sox would face the daunting task of winning four straight games in four days with an over-taxed bullpen.  At that point, Tim Wakefield, who was the scheduled starter in Game Four, went to manager Francona and offered to take one for the team.

“I recognized the spot we were in,” Tim recalls.  “We were facing four must-win games in four days and we couldn’t burn out the bullpen arms we would need.”

Francona took Wakefield up on his offer and Tim pitched 3 1/3 innings to stop the bleeding.  When the Red Sox won Game Four in 12 innings, and Game Five in 14 innings, the importance of Wakefield’s sacrifice in Game Three was clear.  Fittingly, he was the winning pitcher in Game Five.

The Red Sox swept New   York in Yankee Stadium to complete the greatest comeback in sports history.  Tim Wakefield was named the Boston starter in Game One of the World Series at FenwayPark against the St. Louis Cardinals.

“It was such an honor to be named the starter in the opening game of the World Series.  I wish I had pitched better,” he says referring to the Red Sox 8-6 win, “but starting that game was something I will always remember.”

The Red Sox went on to sweep the Cardinals in four games to win their first World Championship in 86 years.  Tim Wakefield still savors that historic moment.  “To be able to celebrate that moment with my teammates, knowing the contribution every player made, was the highlight of my baseball career.”

Early in the 2005 season Tim Wakefield signed a one-year “rolling contract” that effectively made him a Red Sox player for life.  Tim rewarded management with 16 wins to lead the staff.  His 2006 season was limited by a stress fracture in his rib cage, but he still managed seven wins.

Wakefield bounced back with 17 wins in 2007, helping the Red Sox to the East Division title.  Reflecting on the Red Sox second World Championship after sweeping the Colorado Rockies in the World Series, he says, “To celebrate a second World Championship was special.  Every team starts the season with that goal in mind, but only one team makes it.”

In 2008, Tim won ten games and in 2009, he won eleven, reaching double figures in wins for the third straight season.  And in 2009 he was named to his first All-Star team by TampaBay manager Joe Maddon.

In 2010, he split his time between starting and relieving and he became the oldest player (43) to pitch for the Red Sox.  Tim Wakefield’s last season with the Red Sox was 2011, and his seven wins brought his career win total with the Red Sox to 186 wins.

When he retired at age 45, Tim Wakefield had set Red Sox records for batters faced, games started and innings pitched.  And no Red Sox player in team history was ever a better teammate.

In 2010, Tim Wakefield became the first Red Sox player to be selected as the Roberto Clemente Award winner.   This honor is awarded annually to the major league player who, “best exemplifies the game of baseball, sportsmanship, community involvement, and the individual’s contribution to his team.” 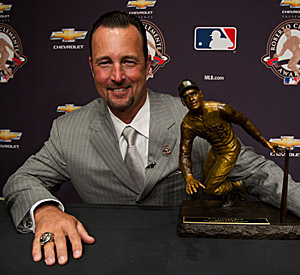 “Winning the Clemente Award was a thrill for me,” Tim emphasizes.  “I recognized at the beginning of my career how fortunate I was to be in the big leagues.  I wanted to give back by helping out in Boston and my home community in Florida.”

Tim Wakefield’s top priority today is his family.  He and his wife Stacy, a Boston-area native, and their two children live in Boston for part of the year, and near his birthplace in Melbourne, FL, for the rest of the year.

In addition to focusing on his family Tim also serves as a special assignment instructor for the Red Sox, and he is the honorary chairman of the Red Sox Foundation.  He looks forward to continuing with his role a commentator with NESN.

“My roles with the Red Sox and NESN keep me involved with baseball and the Red Sox,” Tim says.  “And my schedule still allows me to spend lots of time with my family.

The Roberto Clemente Award truly captures Tim Wakefield’s contributions to the Red Sox.  He was an outstanding player and a teammate, and he was a leader in community service throughout his distinguished career.