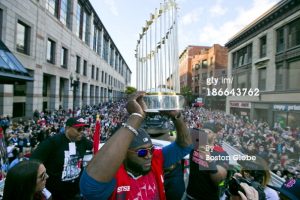 The triumphs of the past ten seasons have been almost magical for Red Sox fans.  That’s especially true for long-time fans who suffered through four World Series losses, not to mention two playoff game losses in 1948 and 1978.

And the Red Sox are the first team in the 21st century to win three World Championships within ten seasons.  Over the past 40 seasons, as parity has emerged within MLB, this feat has become as rare as a Yankee fan at a Red Sox rolling rally!

If we flip the calendar back ten more years to 1964, only the Oakland A’s (1972-1974) are added to this short list.  The Red Sox are members of a very exclusive club over the past fifty seasons.

BACK IN THE DAY

From the first World Series in 1903—won by the Red Sox five games to three over the Pittsburg Pirates—until MLB began expansion in 1961, there were only sixteen major league teams.  With only 16 teams, compared to 30 teams today, the chance for three World Championships in ten years was much improved.

Despite the improved odds, the first sixty World Series winners included only five MLB clubs with three World Championships in ten years.  And the Boston Red Sox were the second team to achieve this rare distinction.

Looking back over the rich fullness of time, there have been 109 World Series winners.  But only five teams—the Red Sox, Yankees, Cardinals, Athletics, and the Dodgers have managed three World Championships in the span of ten seasons.

The New York Yankees, of course, have achieved this standard numerous times and they lead the pack.  But next-in-line, only the Red Sox, Cardinals, and Athletics have won three World Championships in ten seasons during two separate eras. 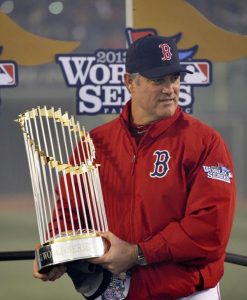 And how rare is it for a new Red Sox manager to guide his team to 28 more wins in his first season? Rare enough that John Farrell’s year-to-year win improvement broke a 101 year-old club record.

In 1912, manager Jake Stahl took over a Red Sox team that had finished fourth in the American League with 78 wins.  New manager Stahl piloted the Red Sox to 105 wins and a World Championship during the team’s first season playing in Fenway Park.  But Farrell’s improvement in wins eclipses Stahl’s 27-win improvement.

In 1967, Dick Williams took over a Red Sox team that had finished ninth in the American League with only 72 wins the previous season.  Despite 100-1 odds, Williams guided the Impossible Dream team to the American League pennant and a World Series.  But the 1967 Red Sox won 92 games and William’s 20-win improvement falls far short of Farrell’s achievement.

We should mention in passing that new Red Sox manager Kevin Kennedy’s 1995 team won 32 games more than the 1994 club.  But the 1994 season had been suspended in August and Kennedy’s Red Sox played 29 more games in 1995.

The 1946 Boston Red Sox set the all-time club record with a 33-win improvement.  However, manager Joe Cronin was in his 12th season as manager of the Red Sox.  And the return of Ted Williams, Bobby Doerr, Johnny Pesky, and Dom DiMaggio from military service would make any manager look good!

FROM WORST TO WORLD CHAMPIONS

How rare is it for a team to go from last place in its division to a World Championship the following year?  It is so rare that it has only been done once before.

In 1991, the Minnesota Twins, who had finished last in the American League West Division the preceding year, defeated the Atlanta Braves in the World Series to become the first MLB club to go from “worst” to a World Championship.  Of course that distinction was pre-ordained since the Braves had gone from “worst to first” in the National League West Division!

Boston Red Sox fans will always measure dramatic turnarounds against the 1967 Impossible Dream team.  Almost no one predicted a World Series appearance for either the 1967 or the 2013 Boston Red Sox.

The 1967 Boston Red Sox will always occupy a special place in the hearts of long-time Red Sox fans.  But the 2013 Improbable Dream team did accomplish one thing that eluded the 1967 club: they defeated the St. Louis Cardinals in the World Series.

“CAN YOU BELIEVE IT?” 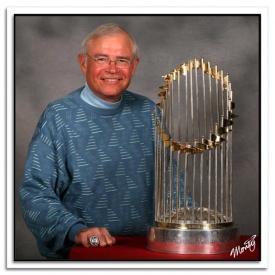 Joe Castiglione has been the radio voice of the Boston Red Sox for 31 seasons.  His signature call when the Red Sox won their 2004 World Championship, “Can you believe it?” is probably the best-know sound-bite in Red Sox history.

Asked how he felt about the 2013 Red Sox chances for a World Championship at the end of spring training, Joe responds, “Not very good.  I didn’t think they had enough pitching.”  And he adds, “There just seemed to be too many question marks.”

Reflecting on the Marathon bombing tragedy, Joe says, “I have never seen any sports team bond with a community the way this team did.  The sports world is generally pretty insular but these players grasped a real world situation and responded.

“There were many hospital visits by players with victims that were never publicized,” he points out.  “The team’s response was very real, very sincere and I think it had a galvanizing effect.”

Castiglione identifies the late-August series against the Dodgers as a defining point in the 2013 Red Sox season. “When we arrived in Los Angeles the Dodgers were the hottest team in baseball, and they beat us 2-0 on Friday night.  But the Red Sox came back with wins on Saturday and Sunday to take the series. That was impressive.”

Heading into the postseason Joe thought the Red Sox were as good as any team in baseball.  “I knew we would be facing the best pitching in baseball as we moved through the playoffs,” Joe recalls.  “But the Red Sox had much more depth than any team they faced.

“And you have to give the farm system a lot of credit. Workman [Brandon] was a big help, and Xander Bogaerts contributed.  And when Will Middlebrooks came back up from Pawtucket he was back on track,” Joe observes.

How about the final call on radio when the Red Sox clinched their third World Championship in ten seasons? “I was down in the Red Sox dugout, waiting to do the on-field interviews when the final out was made,” he recalls.  “Dave O’Brien [Joe’s radio partner of seven seasons] had the final call and he did a great job with it.” 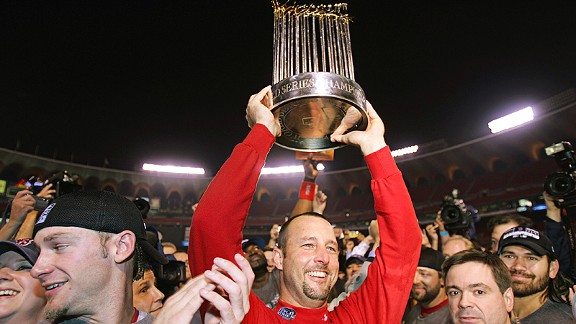 Former Red Sox All-Star pitcher Tim Wakefield had a unique perspective on the Red Sox season.  Tim had played with more than half of the players on the 2013 Red Sox roster before he retired at the end of the 2011 season, and new manager John Farrell had been his pitching coach from 2007 to 2010.

As a special assignment instructor for the Red Sox and a studio analyst for NESN, Wakefield was close to the team throughout the season.  His distinctive position led to an optimistic forecast for the 2013 Red Sox.  “When spring training ended, in my mind I believed they were a playoff-caliber team,” Wake remembers.

“I saw enough of the team in spring training to recognize that a special bond had developed,” he says.  “I noticed a change for the better and it was clear that the new and returning players had come together.  And John Farrell is such a great communicator that I knew he would keep the team focused.”

Tim Wakefield’s optimism proved warranted as the 2013 Red Sox played winning baseball throughout the season.  On July 31st the team was in first place in the AL East Division with a record of 65-44.

“When the club had played about three-quarters of the season,” Wake remembers, “At NESN we started focusing on the fact that their longest losing streak was three in a row.  That’s very unusual for any team.  Typically a team will hit a really rough patch, but this team was very consistent.”

And how did Tim Wakefield feel about the team’s chances when his prediction came true and the playoffs were starting?  “I thought they were the best team in baseball,” he says.  “But even the best team needs a hot streak to win three series and get that World Championship.  They got great pitching and timely hitting and they got to celebrate.”

Tim Wakefield had joined the celebrations in 2004 and 2007, as a key member of the World Champions.  Watching the celebration at Fenway Park on October 30th had a profound effect on Tim.  “Being retired from baseball hadn’t really bothered me, but at that moment I wished I was still part of the team.

“I was able to enjoy the moment through the guys I had celebrated with in 2007, like Jacoby, Pedroia, Lester and of course David Ortiz, who I celebrated with in 2004 and 2007.  And I enjoyed it through guys like Jonny Gomes, Mike Napoli, and Jake Peavy, guys who had been around but had never won before. I know how great that feels.”

Reflecting on the three World Championships in ten years, Tim emphasizes, “It is hard enough to win it once.  You have 30 teams all focused on the same goal, and you have to play well for six months and then win three separate series.”

“To win three championships in ten years tells you that the Red Sox organization has been doing something right.  In fact they have been doing a lot of things right for a long time.” 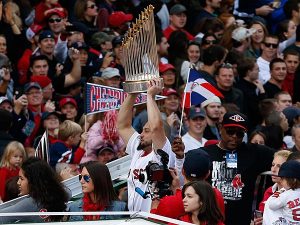 The 2013 World Championship dovetailed seamlessly with the memorable wins in 2004 and 2007.  All three World Series winners were special in their own unique way.

The 2004 World Championship was a once-in-a-lifetime moment, rewarding the faith of lifetime Red Sox fans.  The team used the springboard of the greatest comeback in sports history against the Yankees in the ALCS to sweep the Cardinals and end the 86-year championship drought.

The 2007 World Championship represented a season of excellence.  That club provided drama by overcoming a 3-1 Cleveland Indians lead in the ALCS and then swept Colorado Rockies in the World Series to put an exclamation point on an exceptional season.

The story of the 2013 Boston Red Sox is a saga for the history books.  The team not only united Red Sox Nation but it forged a bond with a community that was badly in need of a common rallying point.  A season that began with modest expectations provided a storybook finish.

Three World Championships within a ten-year span is indeed a rare accomplishment.

At their introductory news conference in 2001, Red Sox ownership made five commitments, including, “To end the Curse of the Bambino and win World Championships for Boston, New England and Red Sox Nation.”  The 2013 Red Sox World Championship brought those words to life.

Reflecting on the Red Sox resources that brought this special season to reality, there is every reason to believe that the best may be yet to come.