The American League Division Series has provided some of the best memories in Red Sox postseason history.  And given the 2013 team’s flair for the dramatic, this year’s AL Division Series is likely to deliver more of the same.

This is the Red Sox seventh Division Series in the past eleven years.  And the club has won four of their six ALDS appearances since 2003.     Division Series wins in 2004 and 2007, were the first steps in the journey to two World Championships.

Big Papi has been an offensive force during his six Division Series with the Red Sox.  And Jon Lester held the Los Angeles Angels scoreless over 14 innings in the 2008 ALDS.  It will be exciting to watch which 2013 Red Sox player might step forward to earn a spot in Red Sox Division Series history.

The Division Series began in its present format in 1995.  It represents an additional round of playoffs, including the three division winners in each league, and the winner of a one-game playoff between the two “wild card” entries.  The Red Sox qualified for the first ALDS in 1995, as the winner of the AL East Division.

The best-of-five format for the first round of the playoffs adds to the excitement of the Division Series.  In the words of former Red Sox pitcher Tim Wakefield, “Every playoff game is important, but in a short series every game is critical.”  Wakefield, who was the only player who had been with the team during all nine previous Division Series, added, “There is no margin for error.  If you lose the first game in the ALDS you have to take three-out-of-four against a very good team.” 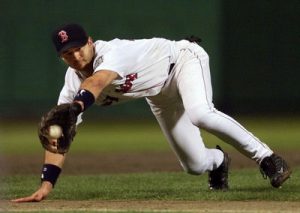 Making the playoffs is a high point for Red Sox fans and the players feel the same way.  Former infielder John Valentin, who played in three AL Division Series for the Red Sox says, “Making the playoffs is what you work for all year.”  Valentin, who was inducted into the Red Sox Hall of Fame in 2010, points out, “You report to spring training in February, and then play a six-month season with one goal in mind: to make it to the postseason.”

FIVE ALDS GAMES FOR THE AGES

The Red Sox had lost to the Cleveland Indians in the ALDS in 1995, and again in 1998.  After losing the first two games of the 1999 ALDS in Cleveland, it looked like the Indians’ dominance would continue.  But the Red Sox returned to FenwayPark to win Game Three handily, and to wallop the Indians 23-7 in Game Four.  The series returned to Jacobs Field in Cleveland for a winner-take-all fifth game.

When Pedro Martinez replaced Derek Lowe in the bottom of the fourth inning, the score was 8-8, and both teams appeared determined to exceed the Red Sox 23-run outburst of the previous evening.  But Pedro pitched hitless ball over the final six innings, and in the seventh inning Troy O’Leary, who had hit a grand slam home run in the third inning, added a three-run homer to lead the team to a 12-8 victory.  The Boston Red Sox had won their first ALDS Championship.

When the Red Sox returned to FenwayPark for Game Three they were on the brink of elimination from the ALDS.  Strong performances from Oakland pitchers Tim Hudson and Barry Zito gave the A’s two home wins and meant the Red Sox would have to win three straight to move on to the AL Championship Series.  Game Three turned out to be a pitchers’ duel featuring outstanding efforts from starters Derek Lowe and Ted Lilly, followed by strong relief pitching for both teams.

When pinch-hitter Trot Nixon stepped into the batter’s box with Doug Mirabelli on first base, the score was tied 1-1 in the bottom of the 11th inning.  Nixon turned on a Rich Harden fastball, driving it into the centerfield bleachers, and Red Sox fans celebrated the team’s first walk-off ALDS win.  Trot’s dramatic home run set the tone for the balance of the series, as the Red Sox won the next two games and advanced to the AL Championship Series against the New York Yankees.

The Red Sox swept Games One and Two in Anaheim behind strong pitching from Curt Schilling and Pedro Martinez.  And they were sailing along with a 6-1 lead after six innings in Game Three at FenwayPark.  But a five-game series can turn on a dime and Vladimir Guerrero capped an Angels’ rally with a grand slam home run to tie the score at six runs each.  Excellent relief pitching kept both teams scoreless, and the score remained tied through the bottom of the tenth inning.

With two out and Pokey Reese on first base, the Angels brought in lefthander Jared Washburn, who had started Game One of the series, to face David Ortiz.  Big Papi electrified the sellout crowd by launching a mammoth blast over the Green Monster for a walk-off home run.  The ALDS win over the Angels set the stage for the dramatic ALCS Championship win over the New York Yankees, followed by the sweep of the St. Louis Cardinals in the World Series to secure the team’s first World Championship in 86 years.

By finishing first in the AL East Division, the Red Sox earned the home field advantage in the ALDS for the first time since 1995.  The team breezed to a 4-0 win in Game One against the Angels behind a stellar pitching performance by Josh Beckett.  But Game Two proved to be a seat-squirmer and the Red Sox came to bat in the bottom of the ninth inning with the game tied at 3-3.

With Julio Lugo on second base and two men out, Angel’s manager Mike Scioscia elected to walk David Ortiz and take his chances with Manny Ramirez.  Ramirez answered the challenge with a titanic blast over everything in leftfield to give the Red Sox a 6-3 victory.  The Red Sox beat the Angels 9-1 in Game Three for the AL Division Series Championship en route to their 2nd World Championship in 4 years.

In 2008 the Red Sox met the Angels in the ALDS for the third time in the five years.  The team jumped out to a fast start with two wins in Anaheim, led by outstanding pitching from Jon Lester in Game One, and home runs from JasonBay in both games.  But the Angels defeated the Red Sox 5-4 in twelve innings in Game Three at Fenway, and in Game Four the score was tied 2-2 in the last of the ninth.

With JasonBay at second base following a ground rule double, and two outs, shortstop Jed Lowrie stepped to the plate.  Lowrie was facing Angel’s reliever Scott Shields who had struck him out on three pitches in Game Three.  This time Lowrie slapped a single into right field scoring Bay, and the Red Sox were the 2008 ALDS Champions.

The Boston Red Sox have appeared in nine AL Division Series since the current format was adopted and they have won five of them.  Many Red Sox players have raised their games to a higher level to produce this success.

Former infielder John Valentin performed at an elite level in three AL Division Series, particularly in 1999, against the Cleveland Indians.  In 1999, Valentin batted .318, slugged three home runs, and drove in twelve runs in five games to help the team win its first AL Division Series.  His 12 RBI ranks at the top of single Division Series production among all MLB players.

Asked to account for his Division Series success, Valentin said, “I was always a guy who wanted to be in the middle of things when the game was on the line.  And I was never the Red Sox ‘go-to guy’ in the lineup, so I figured it was my time to shine.”  And shine he did!

John Valentin’s former teammate, Nomar Garciaparra, was another Red Sox player who stepped up in the ALDS.  Shortstop Garciaparra hit three home runs in the 1998 ALDS, and he added two more in 1999.  His five round-trippers are second only to Manny Ramirez atop the Red Sox ALDS home run leader board.

David Ortiz has been the leading offensive weapon in the last four Red Sox ALDS wins.  Ortiz’ outstanding 2007 Division Series performance against the Angels ranks him first against all MLB players in batting average, on-base percentage, and slugging average for a single Series.

Lester’s outstanding Division Series career is matched in many categories by former Red Sox pitcher Pedro Martinez.  Pedro’s ten scoreless innings in the 1999 ALDS equals Jon Lester’s 0.00 ERA in 2008.  And his four wins in a Red Sox uniform tie him for seventh in Division Series history.

The 2013 Boston Red Sox have exceeded expectations all season long.  Given their track record of coming through when the game is on the line, there is every reason for optimism about the 2013 ALDS.  One thing is certain: it will be an exciting series for players and fans alike!

Includes all Division Series games whether with   the Red Sox or another team.