Baseball is Back: Memorable Opening Days in Boston Baseball History

The first Opening Day in Boston baseball history took place on April 6, 1871, before a crowd estimated at 5,000, by the Boston Journal.  The game was held at the South End Grounds located on what is now the site of the Ruggles MBTA station.  The Boston Red Stockings, the predecessors of the Braves, defeated a hand-picked opposition by the robust score of 41-10.

The next memorable Opening Day in Boston occurred on May 8, 1901, when the Boston Americans, who would become the “Red Sox” in 1908, defeated the Philadelphia A’s 12-4, behind the strong pitching of icon Cy Young.  A crowd of more than 10,000 fans filled the new Huntington Avenue Grounds, which was located on what is now the NortheasternUniversity campus.  The Boston Post gushed, “Everything inside the high fence was as new as a spring tulip.”  This was the first American League game played in Boston, and few on hand imagined that the new league would outlast the National League team in Boston. 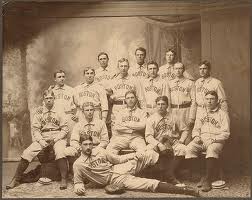 More books have been written about Opening Day at FenwayPark in 1912, than all of the other Openings Days combined.  Historians wonder why the Red Sox 7-6 win over the New York Highlanders didn’t receive more press coverage at the time.  But ironically, opening a new ballpark in Boston wasn’t that big of a deal.  FenwayPark was the sixth baseball facility built in 41 years in Boston, and no one expected it to be around 100 years later!

The 1920s and 1930s were lean years for the Red Sox and the Braves.  But Opening Day in 1946 was special for players on both teams returning from military service a return to normalcy for fans following World War II.  The Braves opened first on April 16, and that day is captured in Bob Brady’s The Wearing of the Green—Opening Day 1946, on our Home Page.   The Red Sox opened on April 20, besting the Philadelphia A’s 2-1, as a sellout crowd at FenwayPark enjoyed a masterful pitching performance by Tex Hughson.

Just 8,324 fans were on hand for Opening Day in 1967, as Jim Lonborg defeated the Chicago White Sox 5-4 on April 12.  This was the low point in Red Sox fan interest before the Impossible Dream team of that season recaptured the hearts of New Englanders by reaching the seventh game of the World Series.  After 1967, an Opening Day attendance of 30,000 or more became the norm and a sellout crowd is virtually assured.

History was made at the FenwayPark opener on April 7, 1973.  The Red Sox-Yankees game was the earliest American League game, and when Ron Blomberg stepped to the plate in the first inning for the Yankees he became the first designated hitter in MLB history.  The first Red Sox DH, Orlando Cepeda, went 0-5 in the Sox 15-5 romp over the New Yorkers, and his great 1973 season is covered below on our Home Page in: The DH turns 40: Remembering Orlando Cepeda

On April 9, 1990, a Fenway sell-out crowd of 35,199 rose to their feet on Opening Day to welcome Bill Buckner back to the Boston Red Sox.  Buckner didn’t play in the game, but the Red Sox defeated the Detroit Tigers 5-2, as Roger Clemens earned the win and reliever Lee Smith was credited with the save.

Opening Day on April 12, 2003, was played before a crowd of 32,029, which included about 300 fans that were sitting in the newly constructed “Green Monster” seats.  The Red Sox were shellacked 13-6 by the Baltimore Orioles but the seats atop the leftfield wall stole the show.

Opening Day in 2005 may be every Red Sox fans’ favorite home opener.  An announced crowd of 33,702 fans cheered as Johnny Pesky and Carl Yastrzemski hoisted the 2004 World Championship banner to the top of the flagpole, officially ending the 86 year drought.  An 8-1 win over the Yankees made it a nearly perfect day. 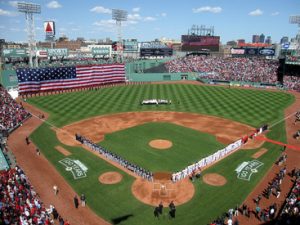 Opening Day in 2008 provided another opportunity to celebrate a World Championship and the defending champs defeated the Detroit Tigers 5-0.  Apparently two World Championships were enough for fans to forgive Bill Buckner and the much-maligned Billy Buck received a standing ovation when he threw out the first pitch.

Expectations were low for the home team on Opening Day in 2013, but the sellout crowd enjoyed a 3-1 victory over the Orioles as Clay Buchholz shined and Daniel Nova delivered the key hit.  It is doubtful if anyone in the crowd of 37,008 predicted the storybook season that followed.

And that is the real beauty of Opening Day.  Every opener represents a fresh start and the chance that fan’s dreams may come true.