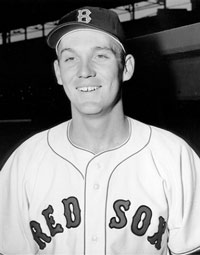 In the winter of 1956 Jack Nichols was the center for the Boston Celtics when Bill Russell was acquired for that team.  Russell could stand flat-footed and jump straight up and touch the rim with both elbows.

Jack was no fool and opted for finishing dental school and promised Red Auerbach he would be available for the games, but not practice.  He told Red his neighbor would take his place in practice.

It was the winter that Sam White asked me to stay in the east and do speaking engagements with him.   After the baseball season was over, Jackie Jensen left for California and I moved into his house only a few houses away from Sam’s.  Sam had been an All-American basketball player for the University of Washington and a teammate of Jack Nichols.

At a party at Sam’s house, I was introduced to Nichols and it turned out he was my neighbor.  He said he knew Sam was tied up, but Sam had told him I could play a little.  Would I mind helping him out?

Talk about a group.  Cousy, Heinsohn, Ramsey, Russell and Sharman have all had their numbers retired by the team.  All of that group, plus Risen, are in the Basketball Hall of Fame.  Cousy was the league’s Most Valuable Player that year and Heinsohn was the league’s Rookie of the Year.  Well, besides being a zero fat tolerance game, one seems to need an extra lung to compete at the professional level in that sport.  I found myself somewhat removed from the physical shape needed to compete with the above roster when I agreed to take Nichols’ place in the Celtics practice.

Our speaking engagements were not without adult beverages and bedtime proved to be considerably past the glass slipper number but, once again, my mouth overloaded my ass!

Two things kept happening. 1. Every time I was chosen to be on one team in practice, the other team clapped.  2. I always wound up guarding Heinsohn and it sounded like this: “Oops sorry Sully. Let me help you up. You’re not bleeding are you pal?

“Jesus, I didn’t mean to step on your foot buddy.  Damn, Sully I had no idea my elbow could make a welt like that.

“Godammit Frank, I didn’t mean to put you that far into the seats.  Come on, get up and I’ll buy you a beer after practice.”

Auerbach played me all pre-season and asked me to think about playing two sports.  I thanked him, but told him I thought my butt was already “maxed” out.