Former Red Sox pitcher Bill Monbouquette never forgot his 18th birthday.  That birthday is a milestone for all of us, but Bill spent his 18th birthday on the mound at the old Polo Grounds pitching for US All-Stars against the New York All-Star team in 1954 Hearst Sandlot Classic.

“We [the New England All-Stars] played one game at a field in Gloucester and I struck out 12 batters in four innings,” he recalled.  “Then we played the final game at FenwayPark and I struck out five of the six batters.  That earned me the MVP award and a trip to New York   City.”

The first future Red Sox player to appear in the Hearst Sandlot Classic was Harry Agganis, who played in the 1947 game before a crowd 31,232 fans at the Polo Grounds.  Agganis, who had just finished his junior year at LynnClassicalHigh School, was already widely-known in the Boston area for his success on the gridiron and baseball diamond.

Harry would go on to become an All-American quarterback at BostonUniversity, where he was dubbed “The Golden Greek,” before signing with the Red Sox in 1952.  Agganis was in his second year as the Red Sox first baseman when he died tragically of a massive pulmonary embolism on June 27, 1955. 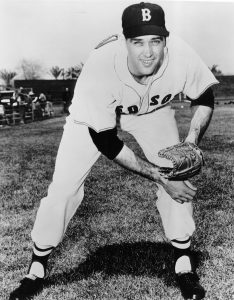 A second Boston representative, Bobby Guindon of EnglishHigh School, had an RBI single for the US in 1959, and later appeared in five games with the Red Sox in 1964.

Harry Agganis of LynnClassicalHigh School was the first future Red Sox player to appear in the Hearst Sandlot Classic and Tony Conigliaro of St. Mary’s of LynnHigh School was the last future Boston player to represent the US All-Stars.  Tony C. had an RBI single in the 1962 Classic at Yankee Stadium and he was managed by Eddie Joost, who had finished his 17-year MLB career with the 1955 Red Sox.

Less than two years later Conig was the starting centerfielder for the Red Sox on Opening Day in 1964.  Tony became the youngest AL player to reach 100 career home runs in 1967.   Following his tragic beaning in August 1967, Tony was named AL Comeback Player of the year in 1969, and he finished his Red Sox career after his second valiant comeback attempt in 1975.