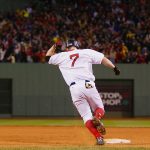 The Boston Red Sox have played in ten American League Division Series since this round of the playoffs began in 1995.  The team has won six of these series, and three ALDS wins—2004, 2007, and 2013—ultimately led to World Championships.  In those three championship seasons the Red Sox won nine games in the ALDS and lost only one. Over the… END_OF_DOCUMENT_TOKEN_TO_BE_REPLACED