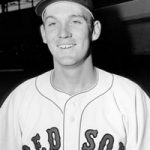 In the winter of 1956 Jack Nichols was the center for the Boston Celtics when Bill Russell was acquired for that team.  Russell could stand flat-footed and jump straight up and touch the rim with both elbows. Jack was no fool and opted for finishing dental school and promised Red Auerbach he would be available for the games, but not… END_OF_DOCUMENT_TOKEN_TO_BE_REPLACED 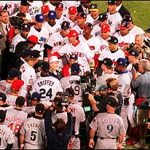 When you think of Ted Williams and his Boston Red Sox playing career, you think of the Kid, the Splendid Splinter, Teddy Ballgame, You think of .406 in 1941, .388 in 1957, the last of his 521 home runs in his last at-bat in 1960. That career was star-studded aplenty: 18 All-Star Games, two Triple Crowns, two MVP awards, six… END_OF_DOCUMENT_TOKEN_TO_BE_REPLACED 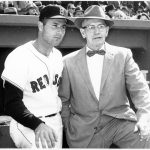 Former Red Sox pitcher Bill Monbouquette never forgot his 18th birthday.  That birthday is a milestone for all of us, but Bill spent his 18th birthday on the mound at the old Polo Grounds pitching for US All-Stars against the New York All-Star team in 1954 Hearst Sandlot Classic. “What a thrill that was,” Bill recalled in an April 2014… END_OF_DOCUMENT_TOKEN_TO_BE_REPLACED 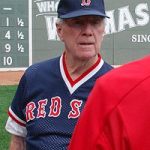 Twenty-eight years ago this July there was magic in the air at Fenway Park: Morgan Magic.  Red Sox third base coach Joe Morgan was named as the interim manager to replace John McNamara on July 14, 1988.  And the Red Sox won under Morgan.  And won some more.  And they kept on winning. At age 85, Joe Morgan still… END_OF_DOCUMENT_TOKEN_TO_BE_REPLACED 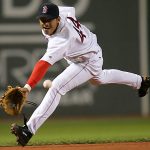 Orlando Cabrera was stunned when he was traded from the Montreal Expos to the Boston Red Sox at the trading deadline in 2004.  The slick-fielding shortstop still remembers every detail of his conversation with Expos’ manager Frank Robinson on July 31.  “Frank called me into his office and he said, ‘I’m going to give you 25 guesses of where you’ve… END_OF_DOCUMENT_TOKEN_TO_BE_REPLACED